10 amazing things to do in Hiroshima, Japan! 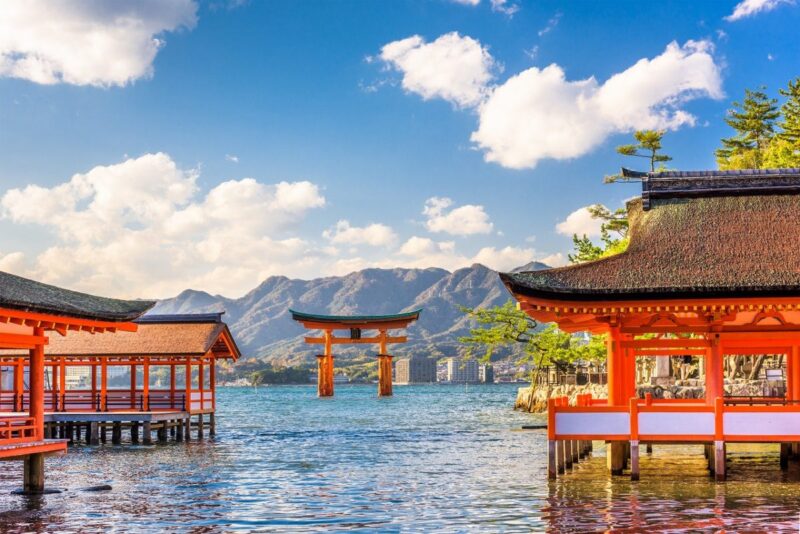 Located in Chugoku region along the Seto Inland Sea, Hiroshima is known worldwide for its famous and tragic history. The prefecture was tragically targeted by an atomic bomb in 1945, but the government took great efforts to rebuild the city after the war, and now it offers many humbling and eye-opening destinations that are worth visiting at least once in our lifetime.

Hiroshima is located in the Chugoku region in southern Japan, and you can visit the prefecture using the shinkansen (bullet train) from major cities in Japan, including Tokyo (4.5 hours), Kyoto or Osaka (2.5 hours), Himeji (1 hour 45 minutes), and from Okayama (1.5 hours).

Hiroshima also has an airport that operates domestic flights to and from Sapporo (New Chitose), Sendai, Tokyo (Haneda and Narita), and Okinawa (Naha), but we recommend taking the shinkansen if you’re using the JR Pass, as airplane tickets are more expensive than the JR Pass for most of the time.

Although Hiroshima is relatively far from Tokyo, this one prefecture of Chugoku region is worth visiting for its extensive peace monuments and for its stunningly beautiful Miyajima Island, which is home to some lovely shrines and temples.

In addition to its wonderful peace monuments and mind-blowing island, the prefecture is packed with numerous excellent spots like Hiroshima Castle, Shukkeien, and Tomonoura.

Here are our picks for the best things to do in Hiroshima, Japan! 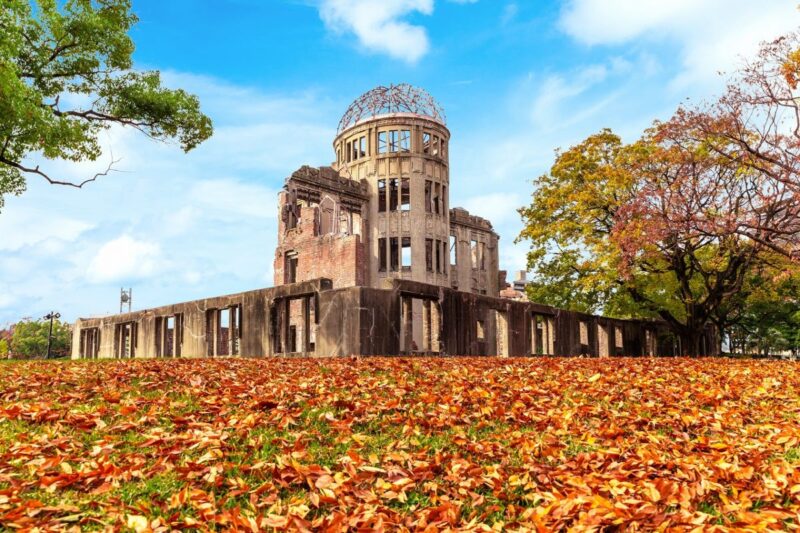 The Atomic Bomb Dome is now a part of the Hiroshima Peace Memorial Park, and it’s perhaps the first thing we see when coming toward the park. A Czech architect named Jan Letzel completed the dome in 1907, and later the dome opened to the public on August 5th, 1915 serving as the prefecture’s Industrial Promotion Hall. 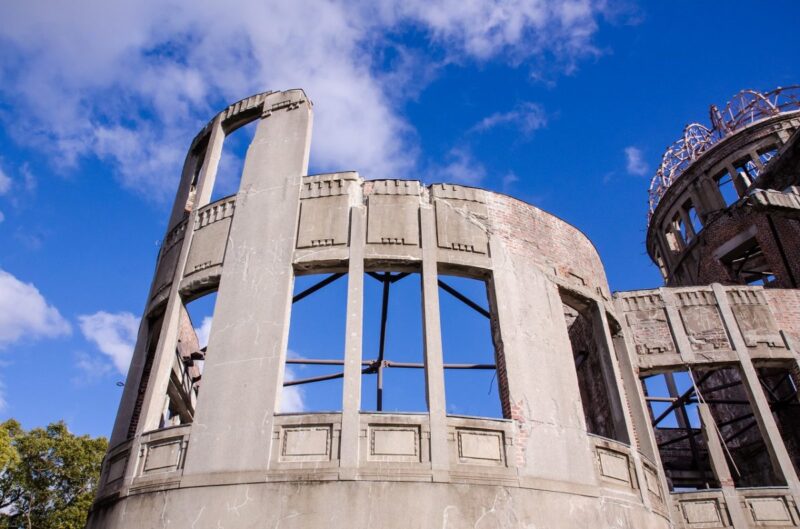 An atomic bomb dropped near the dome 30 years later on August 6, 1945, but it somehow avoided complete destruction and survived the bombing. The remains of the building still stand today, and the local government decided to keep this tragic reminder of war intact, to keep the peace and not repeat what has been done in the past. The site was designated as a World Heritage Site in 1996.

2. A moving experience at the Cenotaph for the Atomic Bomb Victims 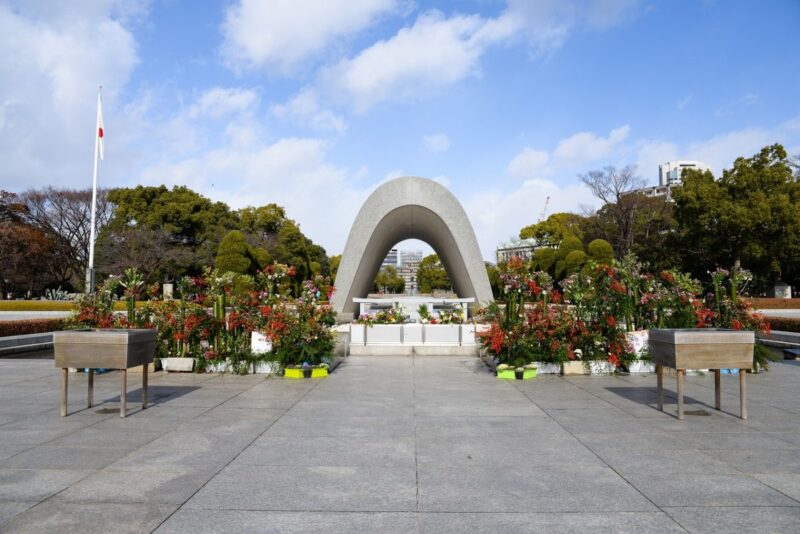 Located in between the Atomic Bomb Dome and the Peace Memorial Museum, this cenotaph is a big arched tomb built in 1952 for those who died from the initial blast or the exposure to radiation of the bomb. 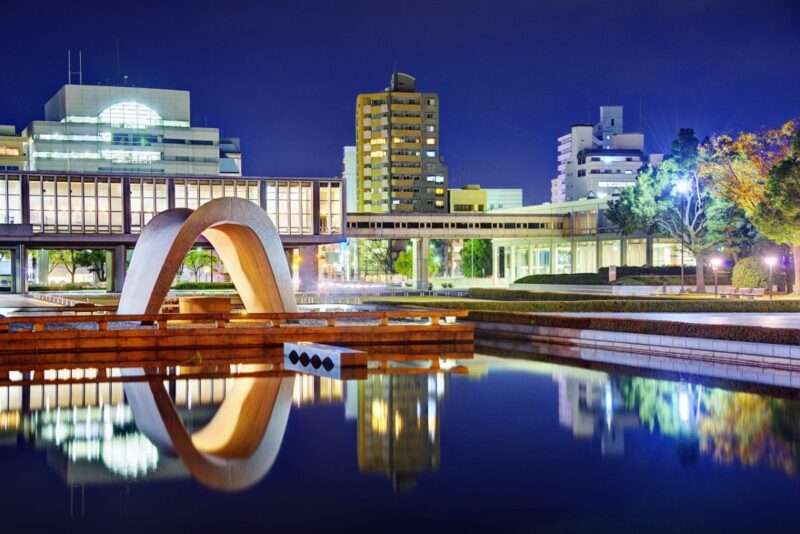 A stone chest below the arch currently holds more than 290,000 names of the victims, and new names will be added to the list every year if new names are discovered. Designed by Kenzo Tange, the cenotaph is engraved with the words: “Let all the souls here rest in peace, for we shall not repeat the evil.”

How about visiting this cenotaph to pray for world peace?

Cenotaph for the Atomic Bomb Victims

3. Learn the chronicles of the bombing at the museum 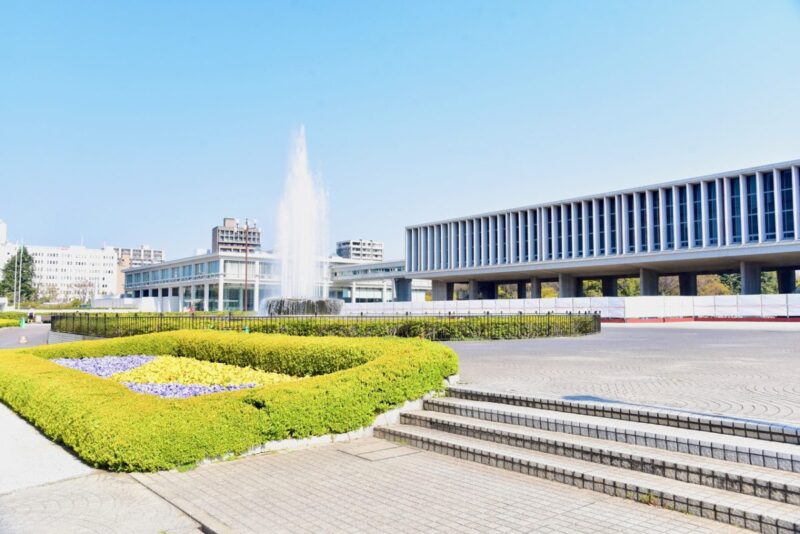 Hiroshima Peace Memorial Museum is one of the very few peace attractions in Hiroshima that isn’t free, and it covers Hiroshima’s history prior to World War II, and focuses more on the atomic bombing on August 6, 1945 and its aftermath.

The collection of materials displayed in the museum tells us the damage and the suffering caused by the atomic bomb, and some people may find the exhibits are harrowing and rather upsetting. 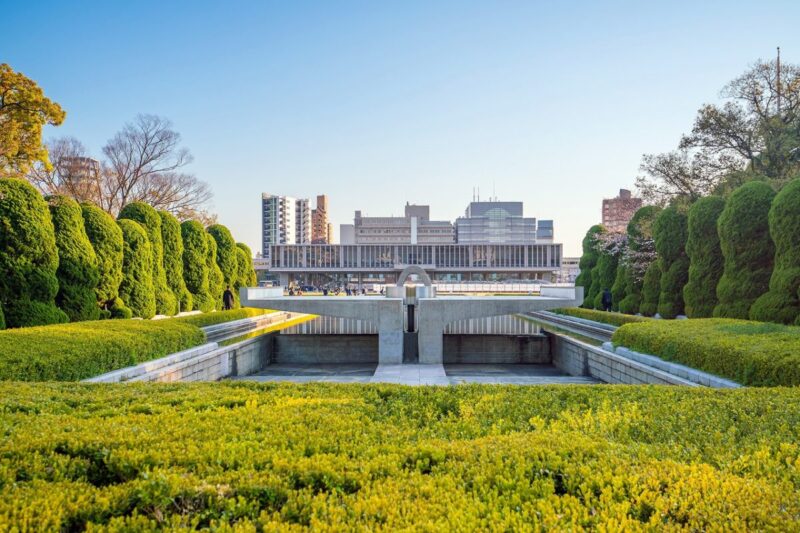 The exhibits include a blistered and fused tricycle a 4-year-old boy was riding during the blast, where he was burned to death. Artifacts like a small wristwatch or a lunch box carried by a student who perished at school invoke similar moments, giving us a sense of the “pain, suffering, and the devastation of the victims and their bereaved families”.

The museum has been operating since 1955, with a consistent goal of promoting peace in the hope to not repeat the history.

4. Visit the Carp Castle, the symbol of Hiroshima Prefecture 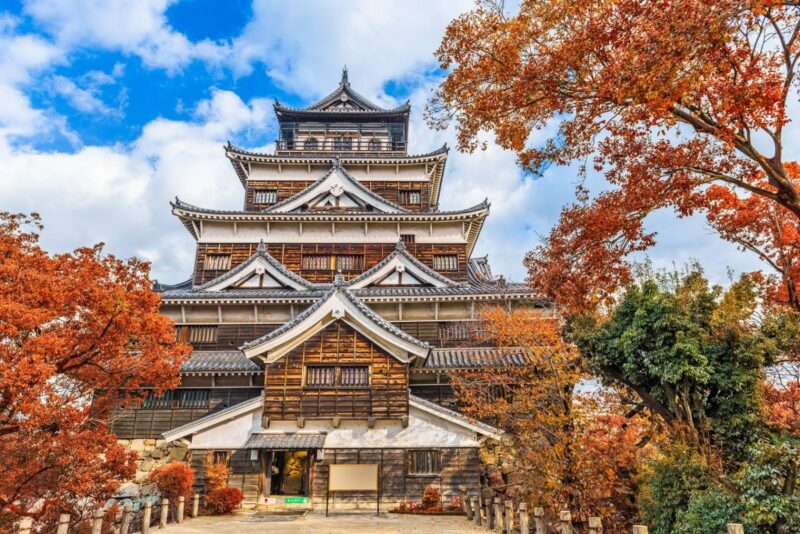 Also known as Carp Castle, Hiroshima Castle was completely destroyed in the blast, but rebuilt to look exactly how it was before in 1958. The new castle features four floors of museum exhibits, and a balcony offering panoramic views of the city and surrounding area.

The castle was originally constructed in 1589 under the orders of Mori Terumoto, and later the castle served as the political and economic center of the city. The new castle was built based on historical documents, and it has been designated a national historic site, and ranked as one of Japan’s Top 100 Castles.

Although the castle didn’t survive the blast, three trees within the castle’s precincts did. You can find a holly, eucalyptus, and willow tree, which were only between 740 and 910 meters away from the center of the blast. These trees are now symbols of the city’s strength and ability to survive and flourish despite its vulnerability after a truly devastating event.

Closed from December 29 to December 31

5. Visit Katsurahama Beach and gaze out over the Pacific Ocean 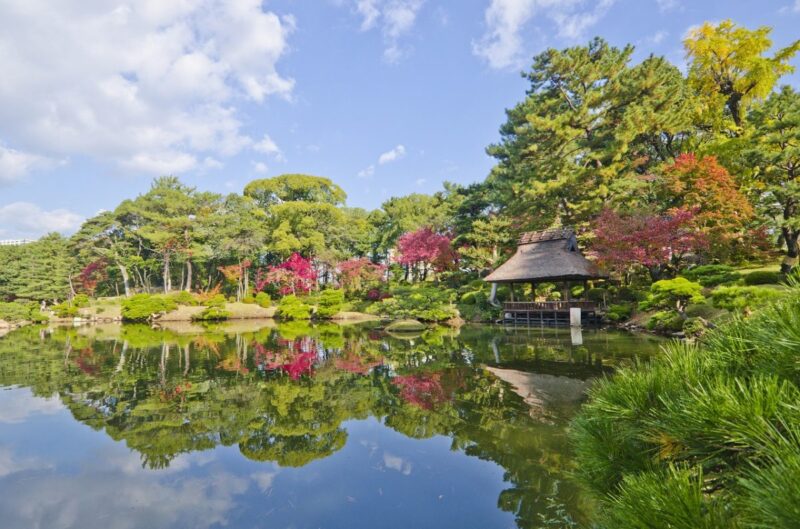 Shukkeien is a picturesque and tranquil Japanese garden, and its history dates back to 1620 when it was created for the first time. Ueda Soko (1563 – 1650), a notable tea master and samurai designed this wonderful garden, which features valleys, mountains, and forests in a limited space. 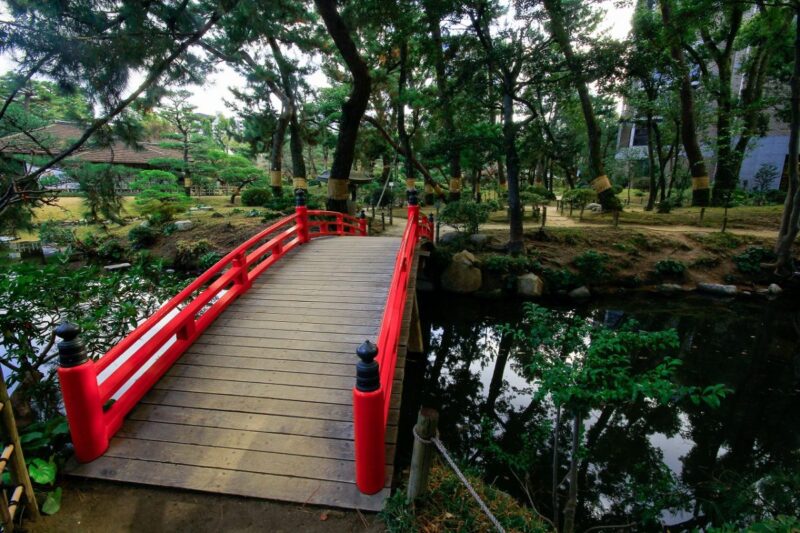 One of the best features of this garden is its main pond, a natural-looking artificial lake that dominates the center of the garden. Traversable via an arched stone bridge, the garden displays numerous features of the traditional aesthetics of Japanese gardens, and there are a number of tea houses around the main pond offering ideal views of the surrounding scenery.

Closed from December 29 to December 31

Access: about a 15-minute walk from JR Hiroshima Station

6. Stop by Itsukushima Shrine, a shrine with a floating torii gate 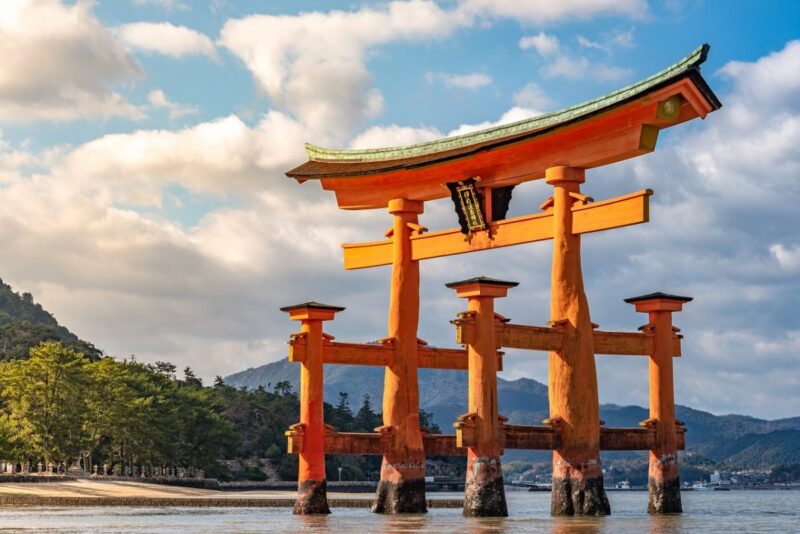 Miyajima is a small island located less than an hour from Hiroshima City, and it’s famous for its giant floating torii gate. Ranked as one of Japan’s three best views, Itsukushima Shrine’s iconic floating torii gate is perhaps the most famous attraction of Miyajima.

Itsukushima Shrine and its torii gate are unique as they are built over water, seemingly floating in the sea during high tide. Taira no Kiyomori, the most powerful man in Japan during the end of the Heian period, decided to build Itsukushima Shrine in 1168. 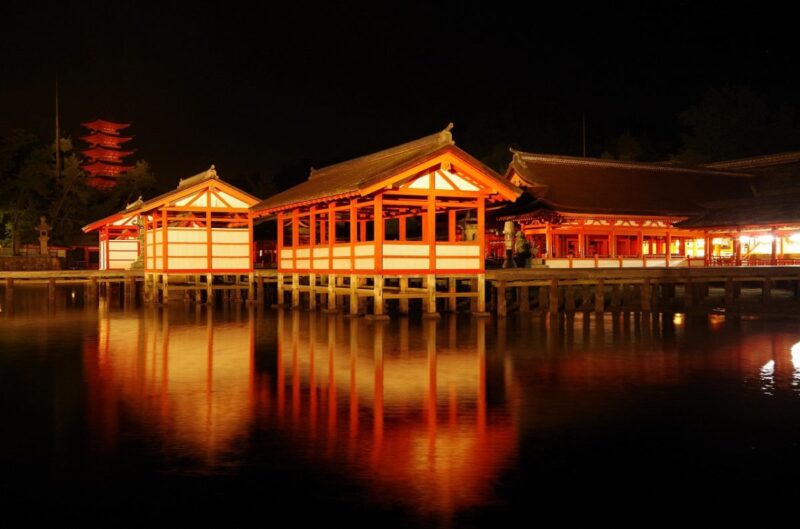 The best time to visit the shrine is in the morning during the sunrise, or in the afternoon right before the sunset. After the sunset, the shrine and the torii gate are illuminated daily until 23:00, providing a perfect backdrop for tourists to enjoy an evening walk. The shrine is closed after the sunset, so it’s impossible to enter it at night.

Open throughout the year

7. Have a “zen time” at Momijidani Park 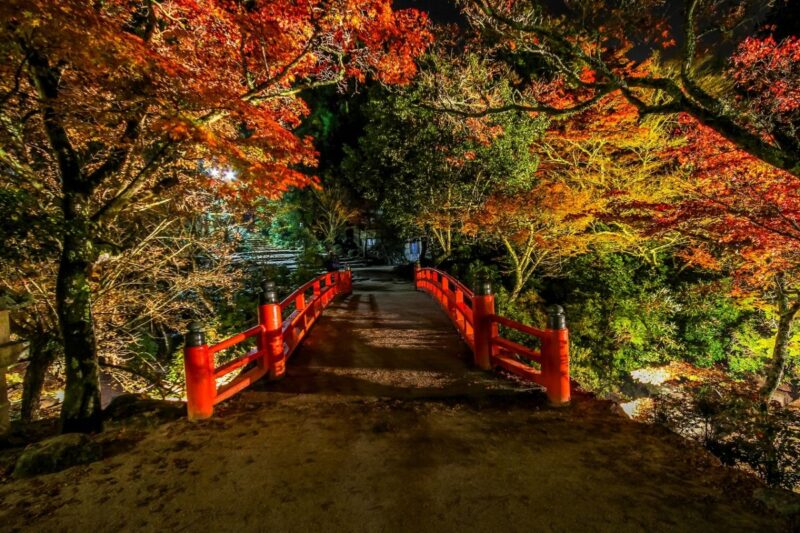 Momijidani Park is located at the foot of Miyajima’s Reiho (sacred mountain) and Mt. Misen. The park is loved for its marvelous view of cherry blossoms in the spring and its vibrant autumn leaves color in autumn. 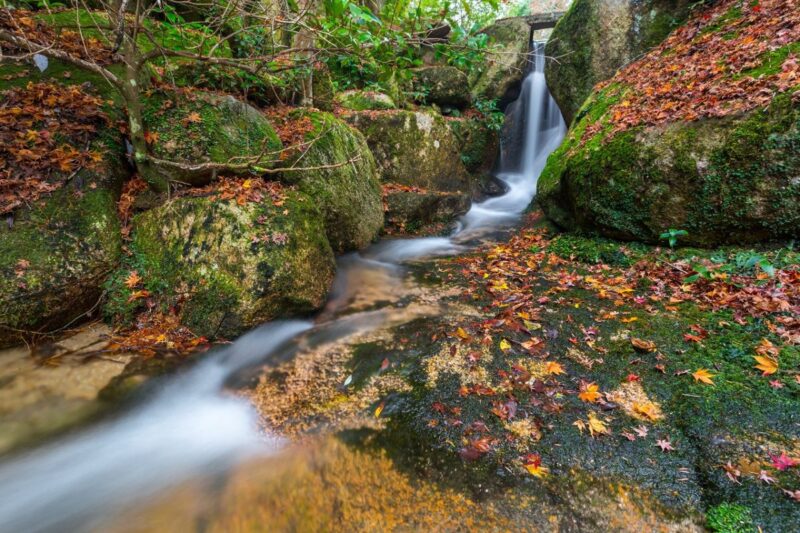 The valley has around 200 momiji (Japanese maple) trees, and the fall foliage occurs every year from mid to late November.

8. Daisho-in, a gorgeous Buddhist temple at the foot of Mt. Misen 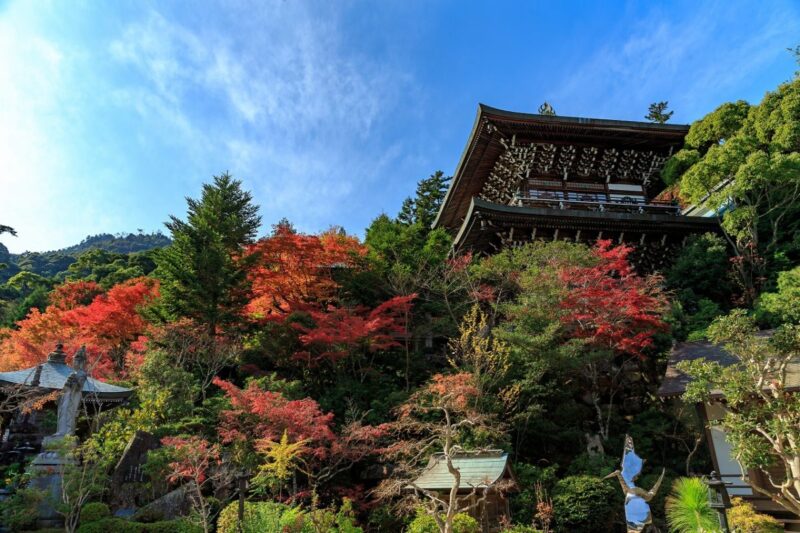 Considered as one of the most important temples of Shingon Buddhism, Daisho-in is located at the foot of Mt. Misen. 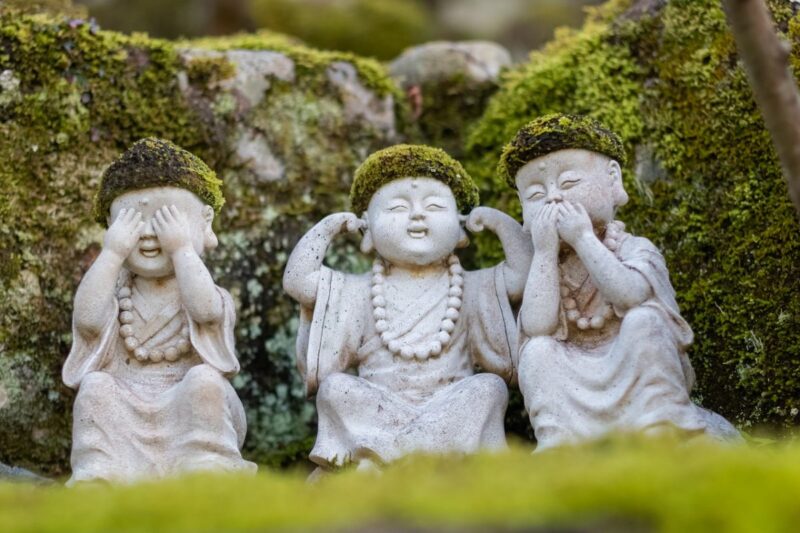 Featuring a variety of buildings, statues, and other religious objects for you to admire, the temple has two main halls (Kannon-do Hall and Maniden Hall), a sand mandala made by visiting monks from Tibet, a tea room, and a cave filled with 88 icons representing the temples of the Shikoku Pilgrimage.

In addition to its beautiful temples and statues, Daisho-in is also known for its breathtaking view of autumn leaves, and it’s included as one of the best fall foliage spots of Japan.

Open throughout the year 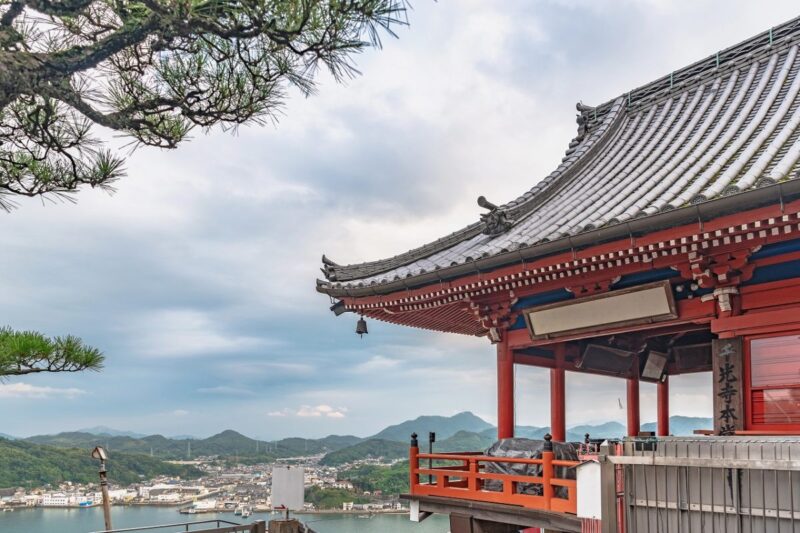 Senko-ji Temple is a Buddhist temple of the Shingon sect, and was built on Mt. Senkoji of Senkoji in 806. Located inside Senkoji Park, the temple’s vermilion lacquered main hall is a symbol of Onomichi City. 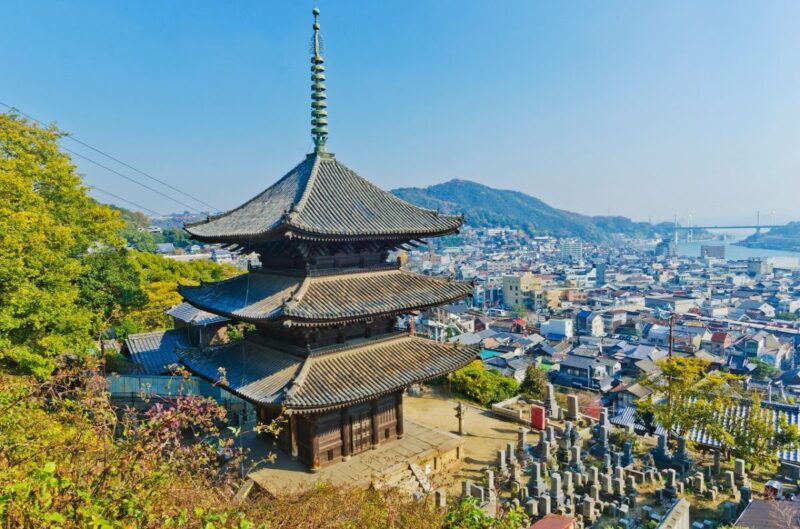 Offering a superb view of Onomichi City, you can overlook the city from this gorgeous temple!

Access: about a 10-minute taxi ride from JR Shin-Onomichi Station, and a 10-minute walk from Senkoji Park’s parking lot 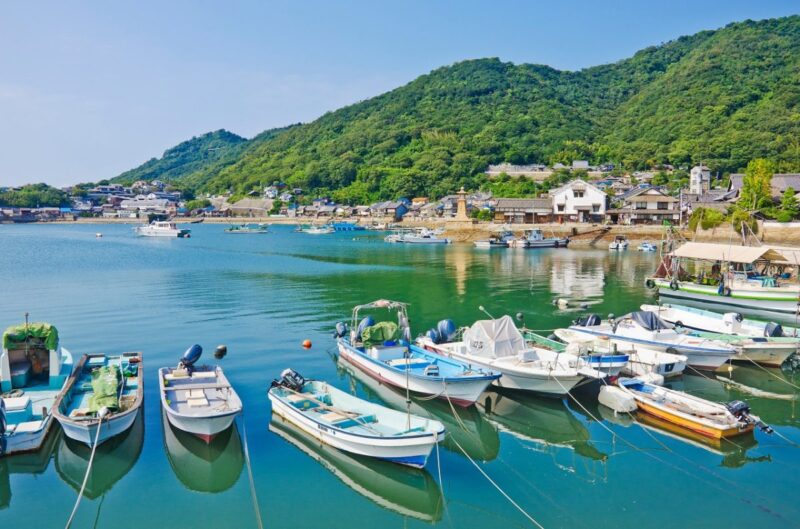 Located at a bay facing the Seto Inland Sea, Tomonoura is a port town at the southern end of Fukuyama City. The beautiful port town features the Instagenic old-fashioned fishing townscape, and it’s a part of the Setonaikai National Park. 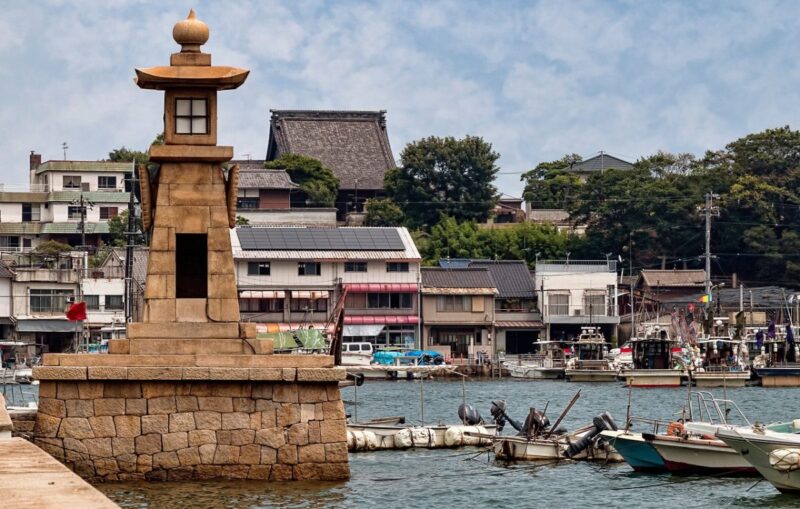 Famous for its crystal-clear water and picturesque townscape, Tomonoura has been picked as a filming location for numerous international and local movies, including “The Wolverine” and “Ponyo on the Cliff”.

Access: take the bus bound to Tomonoura from Fukuyama Station

Hiroshima is blessed with a warm climate and an excellent natural environment, and the prefecture is rich in local products harvested directly from the Seto Inland Sea, or its mountains and rivers. From okonomiyaki to fresh oysters, wherever you go, scrumptious local treats await in Hiroshima. Here are our picks for the best foods to try when visiting Hiroshima! 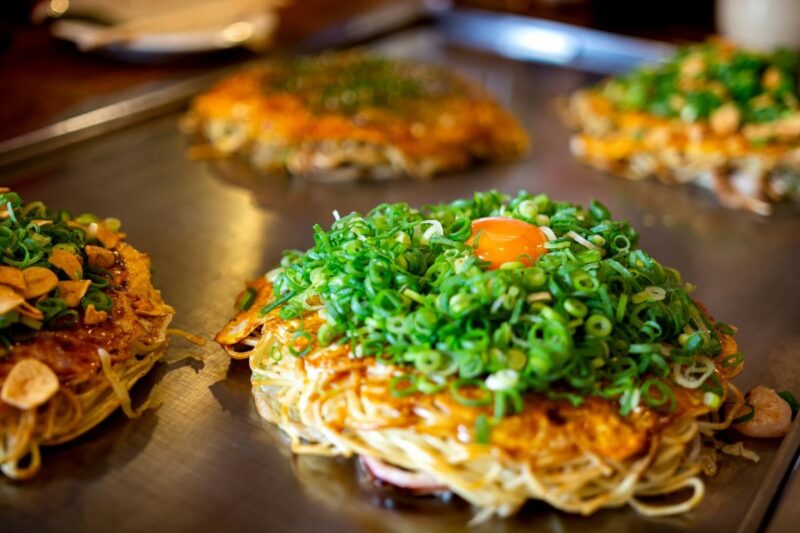 Also known as Hiroshimayaki, the Hiroshima style okonomiyaki has a thin batter base, and the ingredients are built up in layers instead of mixed together. The main ingredients of Hiroshimayaki are meat, seafood, egg, noodles, and vegetables. The cabbage is also piled far higher than in other types of okonomiyaki. 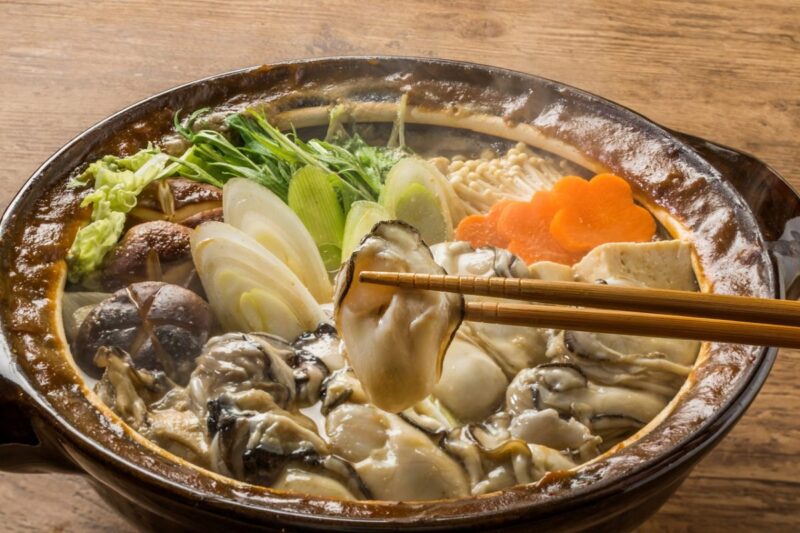 Hiroshima is known for its amazing oysters, which have rich taste and are bigger-than-the-average size. Unlike other regions, where oysters are mainly eaten raw, oysters are eaten cooked in Hiroshima. One of the most famous oyster dishes in Hiroshima is the Hiroshima kaki nabe (Hiroshima oysters hotpot), where fresh oysters are cooked together with vegetables and miso-based soup. 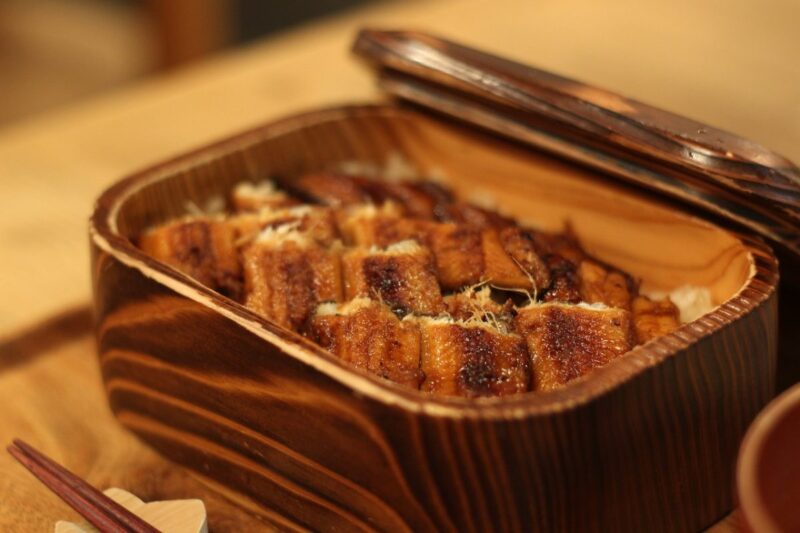 Anago-meshi is a broiled anago (saltwater eels) served in a bowl or lacquer box on a bed of rice. Fat anago are chosen and butterflied, boned and broiled unseasoned, then repeatedly grilled and coated with special sauce. The rice used for Anago-meshi is also cooked in many ways; some shops cook the rice using anago broth, some season the rice with the sauce, and some mix sliced anago into the rice. 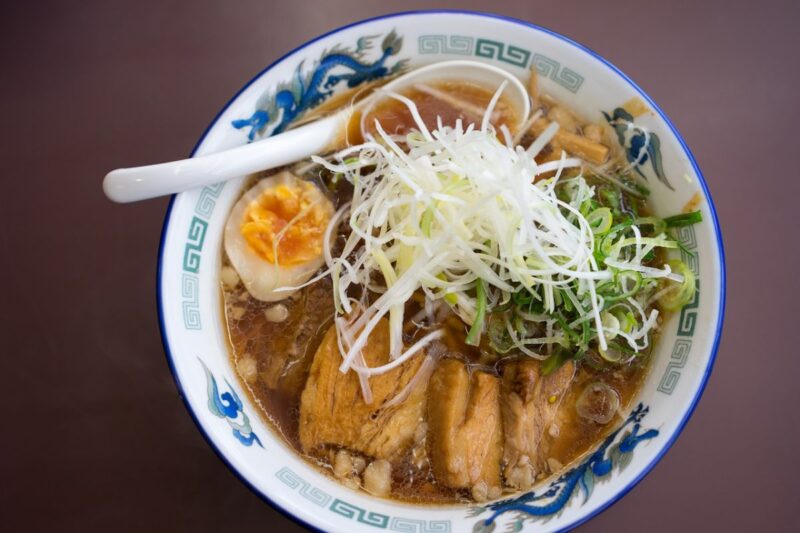 Onomichi ramen is a local specialty of Onomichi City in Hiroshima. What makes Onomichi ramen special is its soup, which is made of chicken broth, with a little amount of fish from the Seto Inland Sea. The soup also uses soy sauce as one of its main seasonings, and the ramen is topped with large pork chashu and bamboo shoots. 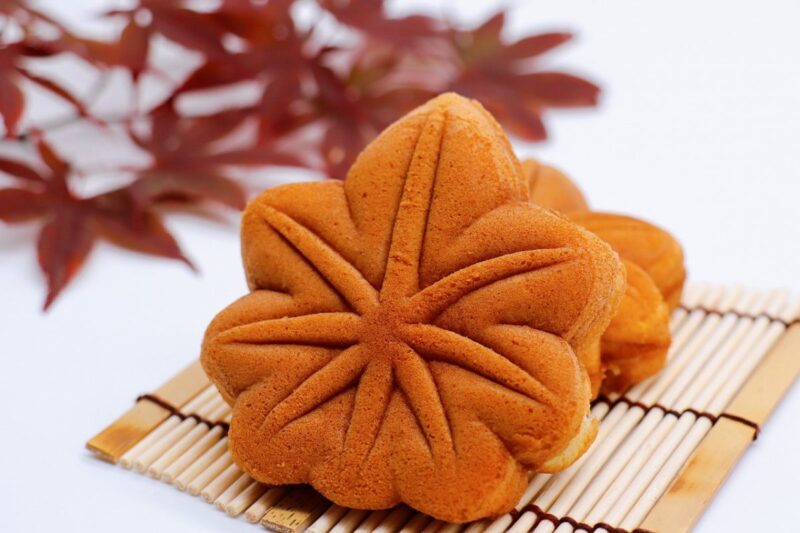 Momiji manju is a momiji (maple) leaf shaped wagashi made by wrapping flavored ingredients like azuki (red bean) paste in castella-like dough, made using flour, eggs, sugar, and honey. Sold at most souvenir stores in Hiroshima, you can purchase this cute wagashi for your friends and family back home!

Now that you have an idea of how many fabulous spots are in Hiroshima, all you have to do is plan your itinerary to enjoy unforgettable experiences in Hiroshima!

Clip Read
10 amazing things to do in Okayama, Japan!

Clip Read
10 amazing things to do in Tottori, Japan!

Clip Read
10 amazing things to do in Shimane, Japan!

Clip Read
10 amazing things to do in Yamaguchi, Japan!