10 amazing things to do in Tokushima, Japan! 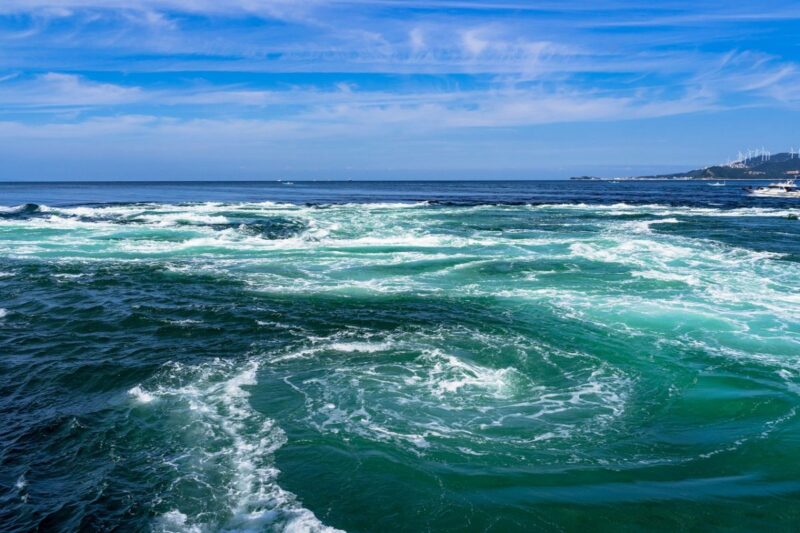 Tokushima is located on the east of Shikoku, south of Hiroshima. The prefecture is the starting point of the Shikoku 88 Temple Pilgrimage, and the prefecture is loved by thrill-seekers who love adventures in nature.

Bordered by rugged mountain cliffs and dangerous whirlpools, Tokushima is the place where you can enjoy both culture and thrills, and it’s a popular spot for whitewater rafting, surfing, and hiking.

Tokushima’s most popular spots are the Naruto Whirlpools, the mysterious Iya Valley with its Kazurabashi Bridge, and Mt. Bizan and its beautiful night view.

Now that you know Tokushima is brimming with culture and thrills, how about visiting the prefecture for a fun-filled weekend getaway?

Tokushima is connected to the mainland of Japan, Honshu, by the Akashi-Kaikyo and Naruto Bridges. It only takes 2.5 hours from Osaka to reach this prefecture by a highway bus.

Tokushima is a spot to visit if you’re looking for something off the beaten path. The prefecture is blessed with beautiful nature such as its mountain cliffs and mystical Naruto whirlpools.

From whitewater rafting to crossing a mountain vine bridge, Tokushima is filled with natural spots offering fun and thrilling adventures to its visitors.

Here are our picks for the best things to do in Tokushima, Japan! 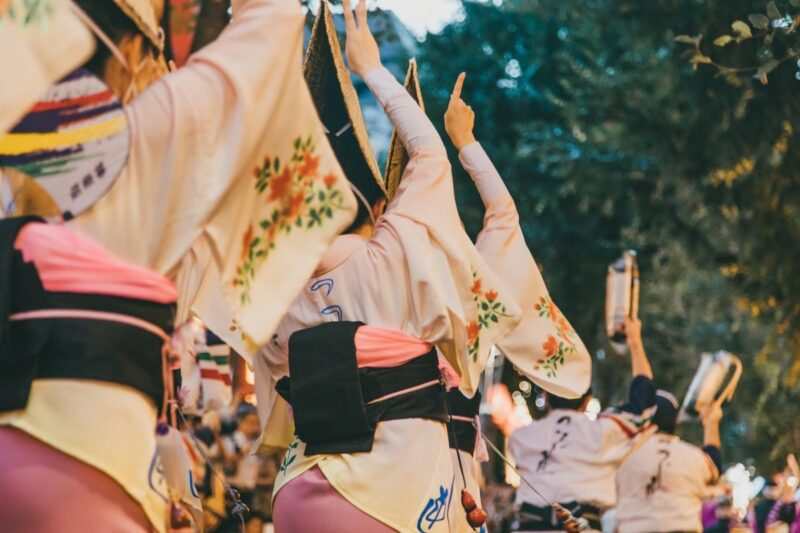 Awa Odori has a long history, dating back to 400 years ago at the beginning of the 1600s. There are a lot of Awa Odori festivals in Japan, but Tokushima’s Awa Odori Festival has the largest participants and attracts more than 1.3 million visitors every year.

Held for 4 consecutive days from August 12 to August 15 every year in the summer, you can see Awa Odori in Tokushima’s parks and streets. 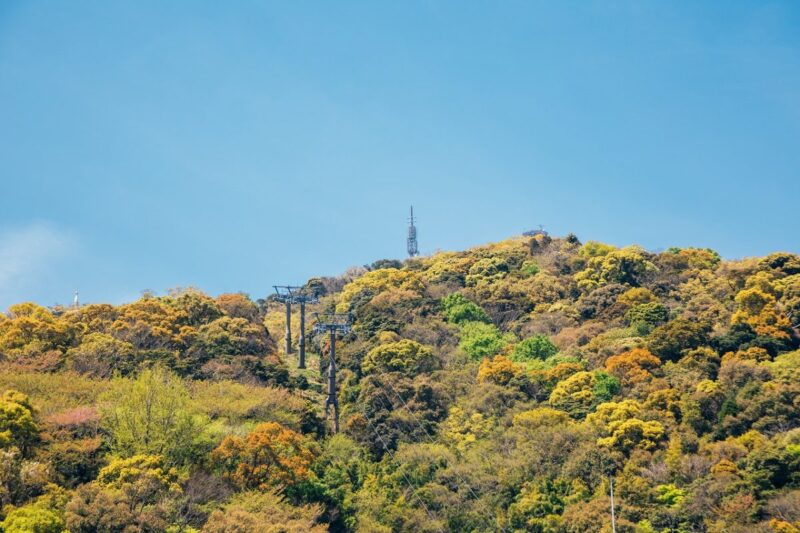 Your trip to Tokushima isn’t complete if you don’t visit Mt. Bizan, the symbol of Tokushima City. Standing tall with a 290-meter height, there is a park called Bizan Park on top of the mountain, where you can get a full view of Tokushima City and the Great Naruto Bridge. 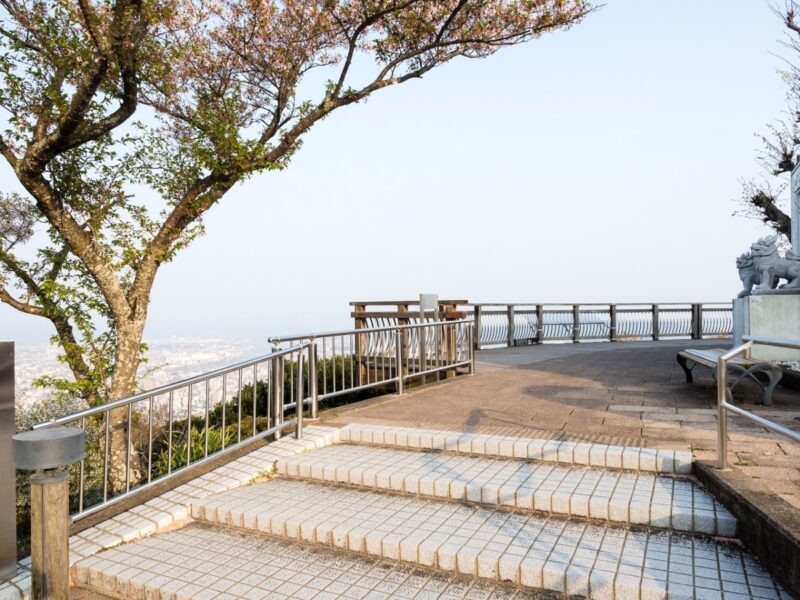 Inside the park, there is a free observation rest area, where you can stare at the breathtaking view of Tokushima City and Naruto Bridge. In spring, the park is covered in pink as the cherry blossom trees are in full bloom.

3. Take the Bizan Ropeway and enjoy the moving view of Tokushima City! 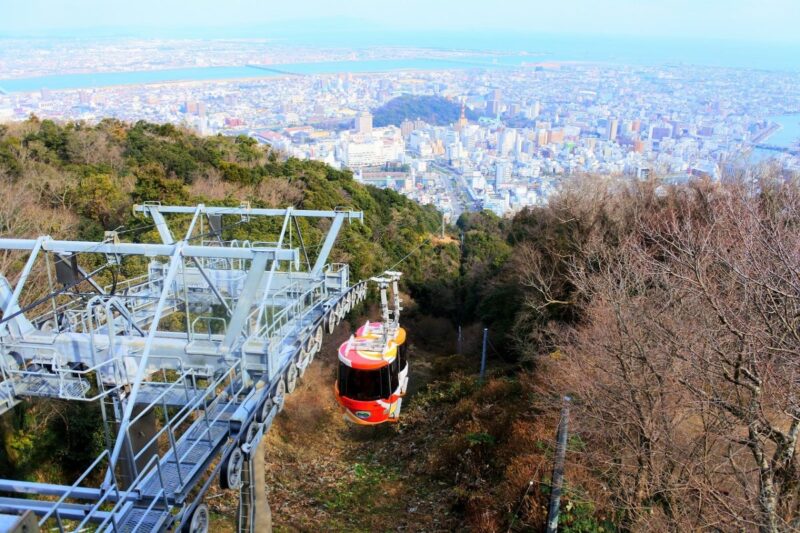 Want to enjoy the view of Tokushima City differently? How about having a round trip of Bizan Ropeway when you visit the mountain?

Can be taken from the Sanroku Station, which is located on the 5th floor of the Awa Odori Kaikan, Bizen Ropeway allows you to enjoy the moving scenery of Tokushima City slowly. The ropeway will take you to the Bizan Sancho Station, which is located on the mountaintop. We strongly recommend returning in the evening, so you’ll be able to enjoy Tokushima City’s night view from Mt. Bizan, which is considered as one of the top 100 night views of Japan. 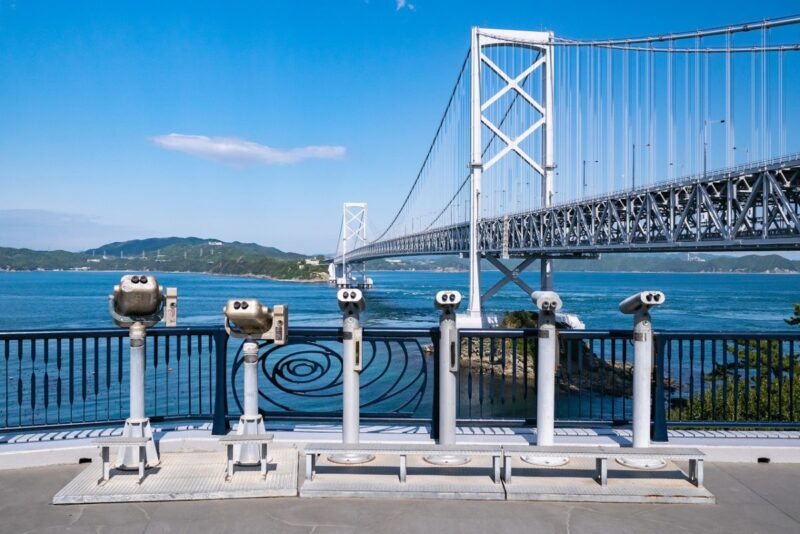 Tokushima is known for its Great Naruto Bridge, a suspension bridge that stretches across the Naruto Strait. The bridge connects Naruto City in Tokushima Prefecture with Awaji City in Hyogo Prefecture, and it’s one of the routes that connects Shikoku Island with Honshu Island. The length of the bridge is 1,629 meters and the width is 25 meters, and there’s a marine promenade called Uzu no Michi on the height of 15 meters on the Great Naruto Bridge that has an observation platform at the end of it, where you can see the Naruto Whirlpools from above. 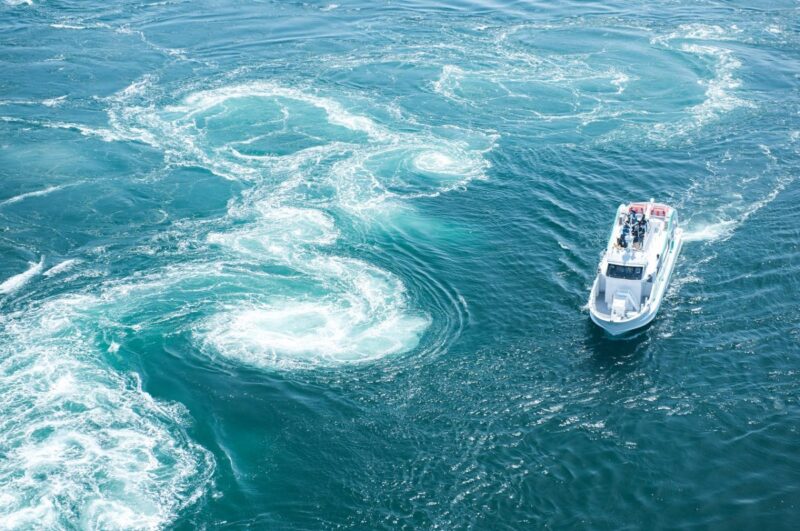 Tokushima is best known for its mysterious and mystical Naruto Whirlpools, which occur along the Shikoku coast of the Naruto Strait. The whirlpools appear every 6 hours, and they are created by the large volumes of water moving between the Seto Inland Sea and the Pacific Ocean between high and low tide.

The whirlpools tend to be larger in summer than in the winter, and the largest during spring tides, which occur every two weeks. Despite being big in size, these whirlpools are not dangerous, and they are best viewed from sightseeing cruises. You can also see these whirlpools from the observatory on Uzu no Michi.

6. A gorgeous gorge nearby the Iya Valley: Oboke Gorge 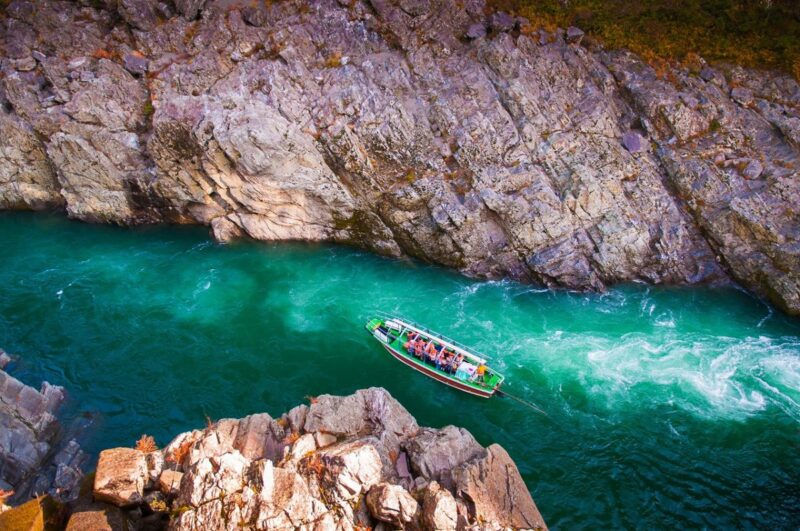 Oboke Gorge is located near the entrance of Iya Valley, and it’s a famous spot for whitewater rafting and river boat in Tokushima. Neighboring the Koboke Gorge, both gorges create a little ways downstream, that are narrow and steep sided. The gorges are cut by the swirling rapids of the Yoshino River, and whitewater rafting in Oboke Gorge can be considered as one of the most thrilling river adventures in Japan. 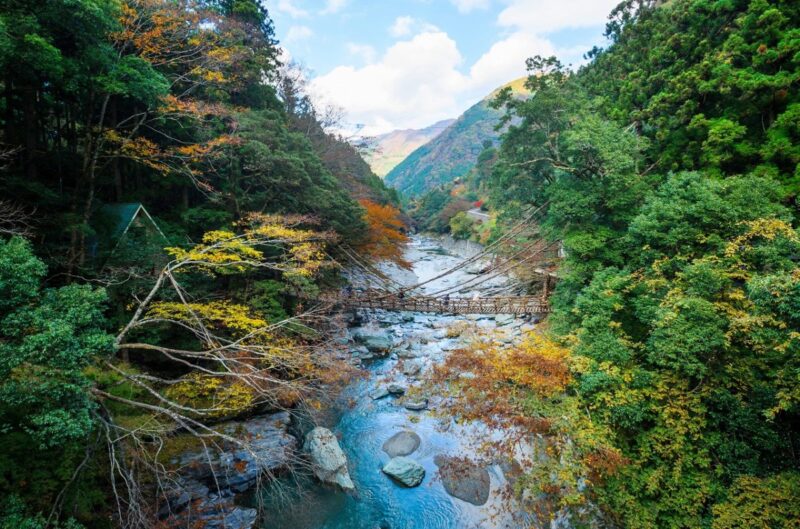 Want to enjoy some thrills for your trip? How about crossing the Iya River with the famous Kazurabashi Bridge?

Kazurabashi Bridge is a suspension bridge made of mountain vine, which stretches across the river of the Iya Valley. 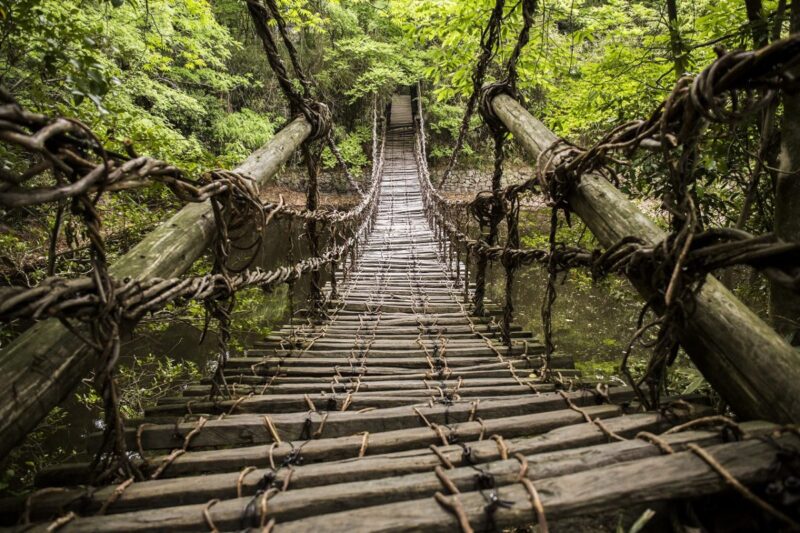 It’s unknown when actually the bridge was built, but some believe that this bridge was built after the Gempei War (1180-1185) along with the other 12 bridges by Heike Refugees. Only 3 bridges survive today, and Kazurabashi is the largest and the most popular amongst all. It is rebuilt every 3 years and anchored to tall cedar trees with steel cables hidden within the vines for safety. You can cross this bridge in one direction only. 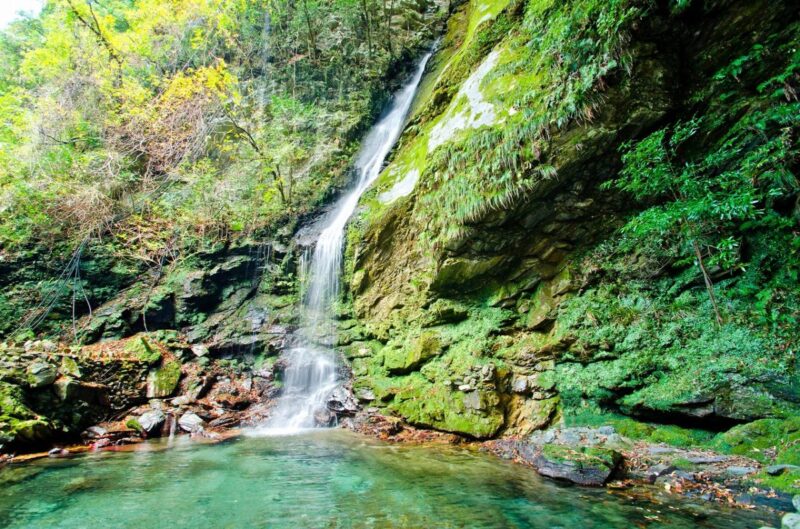 Located on the Iya River, Biwa Waterfall flows straight down over a rock from a height of 50 meters, looking like falling white threads. A legend about this waterfall says that in the 12th Century, a group of warriors called the Heike Clan settled in the Iya Valley after experiencing a bitter defeat in the Gempei War. You need to hike up a steep hill to reach the waterfall, but it’s worth it as you will be rewarded with a beautiful view of the waterfall and a serene atmosphere of it.

9. Explore the House of Indigo: Ai no Yakata 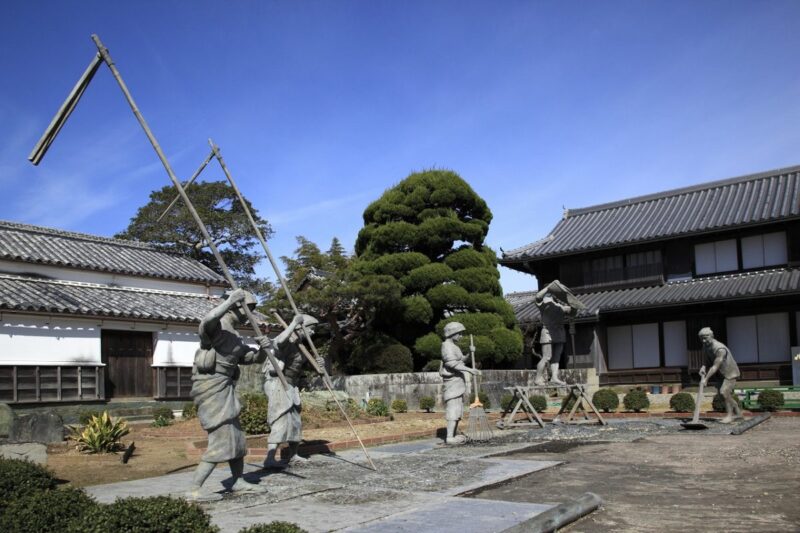 Tokushima is home to indigo dyeing, and visiting the House of Indigo, which is also known as Ai no Yakata (藍の館), will help you understand the history of indigo dyeing in Japan and in Shikoku.

The House of Indigo is a museum located in an old house, which was used as a residence by an indigo merchant in the past. You can tour around the house to learn the ancient art of indigo dyeing here. If you have spare time, you can participate in the workshop to make your own indigo dyeing and learn more about the traditional patterns used in the process.

House of Indigo (Ai no Yakata)

10. Stop by the starting point of Shikoku’s 88 Pilgrimage: Ryozenji Temple 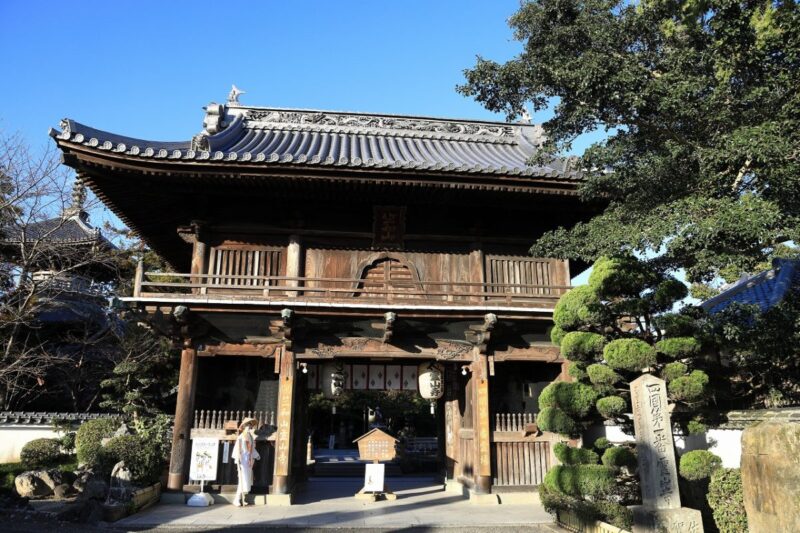 Ryozenji Temple is the first temple of the Shikoku’s 88 Pilgrimage, and it’s located in Naruto town near Tokushima City. The temple is known as the closest temple to Kukai, the monk who found esoteric Shingon Buddhism, as it is located near Mt. Koya, the holiest site of Shingon Buddhism as the Kukai enshrined there. 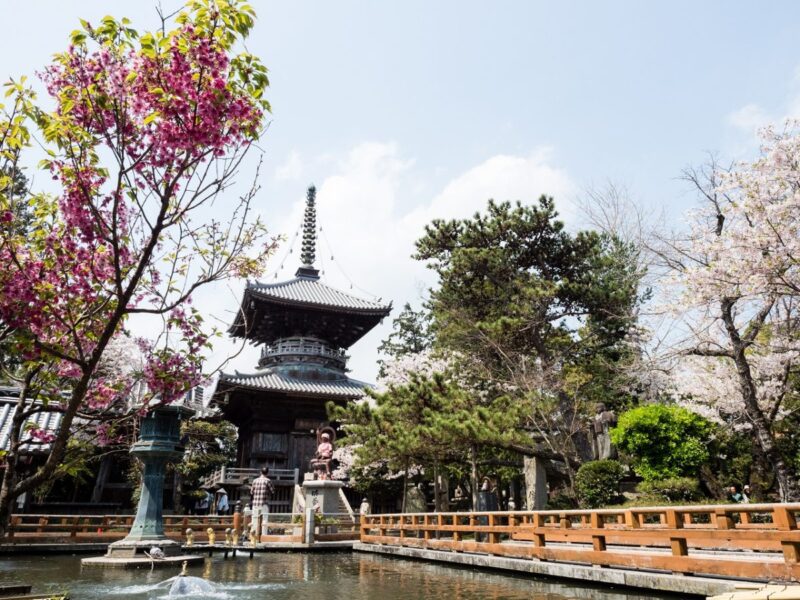 The temple features a two-story wooden pagoda, attractive gardens with a small waterfall, and a large carp pond. In spring, the temple turns to a beautiful cherry blossom viewing spot, so make sure to include this temple in your itinerary when visiting Tokushima!

Located in the southwest of Osaka, and on the corner of Shikoku, Tokushima is best known for its Awa no sanchiku (Awa’s tree livestock), which refers to the prefecture’s beef, pork, and chicken. The prefecture is also blessed by rich seafood products harvested near the Whirlpools of Naruto. From Awaodori chicken to Ise ebi, wherever you go, scrumptious local treats await in Tokushima. Here are our picks for the best foods to try when visiting Tokushima! 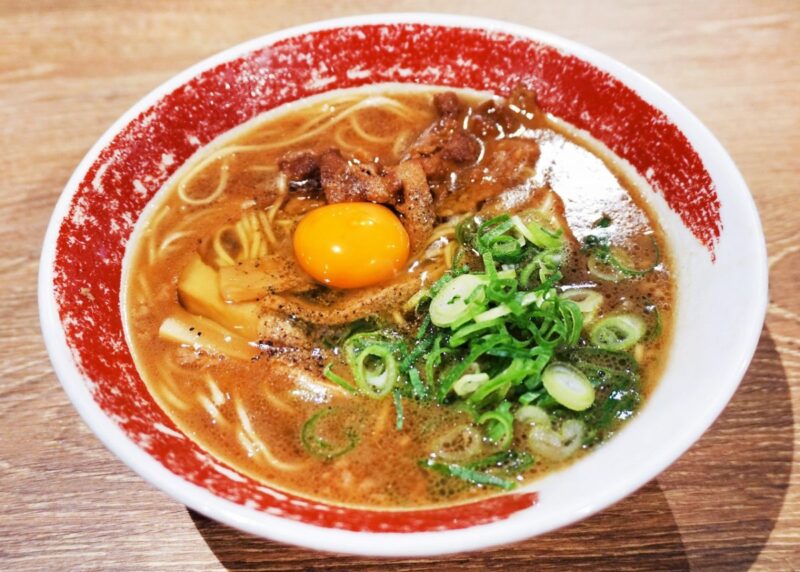 Tokushima is known for its unique ramen, which comes in three different colors – brown, yellow, and white. The brown soup uses the tonkotsu (pork bone broth) combined with soy sauce and is usually topped with raw egg yolk. The yellow soup uses chicken or vegetable broth and soy sauce, and the white soup uses only tonkotsu and light soy sauce. The toppings are pretty similar, but all ramen tastes sweet and salty. 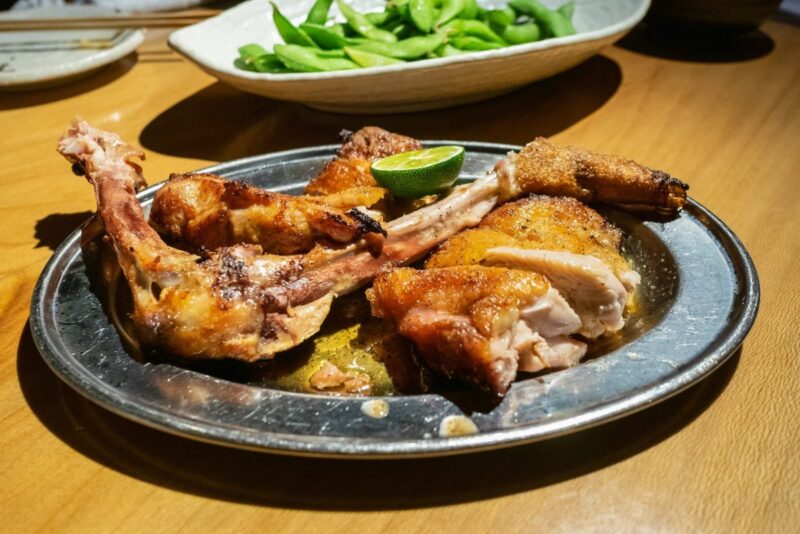 Awa is the other name of Tokushima, and Awaodori chicken is a grilled chicken made of Tokushima’s locally produced chicken. Awaodori chicken is particularly known for its low-fat content, well-balanced texture, and rich sweet flavor. It was named after the famous festival ‘Awa Odori Dance Festival’, which is held in Tokushima every year in the summer, as the chicken resembles the movements of the dancers who dance energetically and freely. 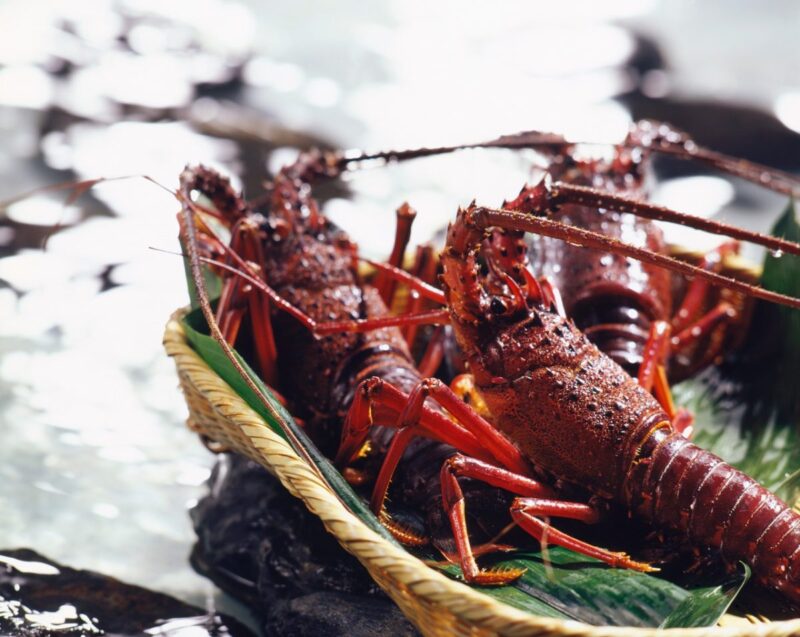 Ise ebi, Japanese spiny lobster, is one of Tokushima’s most famous local products. Usually harvested from the rich fishing grounds where the warm Kuroshio Current flows, Tokushima’s Ise ebi has a sweet and firm flesh, which makes it good for sashimi. Ise ebi is usually in season from October to December. 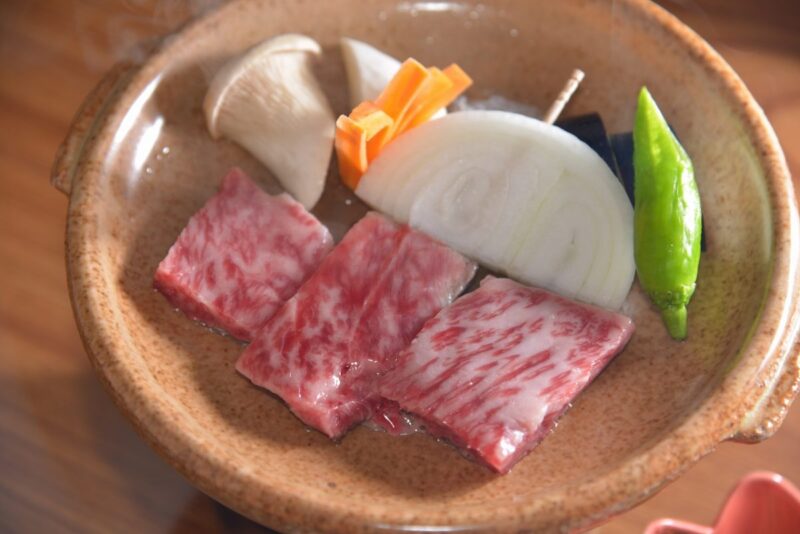 Awa beef is a Wagyu (Japanese beef) brand of Tokushima Prefecture, and it refers to the meat obtained from verified Japanese black cattle. Only high quality meat, which are ranked on the 5th (A5) or 4th (A4) place in a certified meat quality ranking, are allowed to be named Awa beef. The beef itself has a soft texture, sweet taste, and marbled fat. 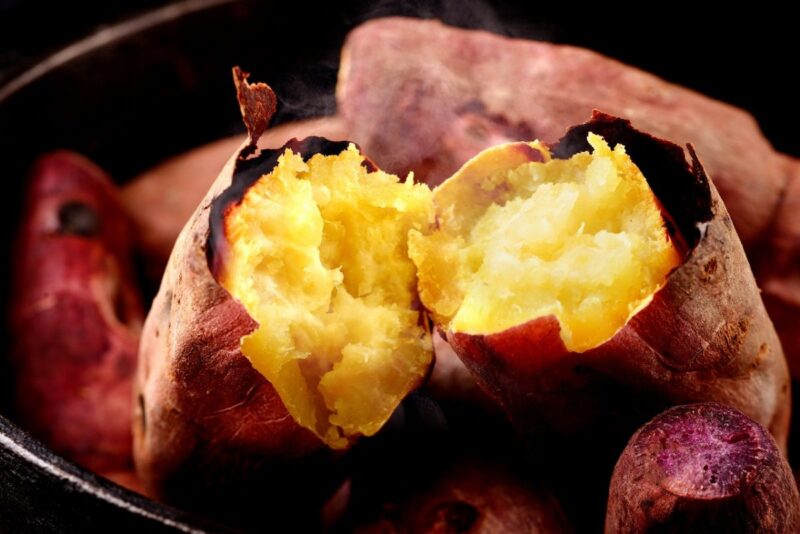 Japan is known for its sweet and fluffy sweet potato, and the most famous variety, Naruto kintoki (golden potato), comes from Naruto City in Tokushima. The potato is named after Kintaro the Golden Boy, a hero in a Japanese folklore. You’ll find these sweet potatoes grilled, fried, boiled, steamed, and even in a form of pudding or ice cream.

Now that you have an idea of how many fabulous spots are in Tokushima, all you have to do is plan your itinerary to enjoy unforgettable experiences in Tokushima!

10 amazing things to do in Kochi, Japan!

Clip Read
10 amazing things to do in Ehime, Japan!

Clip Read
10 amazing things to do in Kagawa, Japan!