10 amazing things to do in Gunma, Japan! 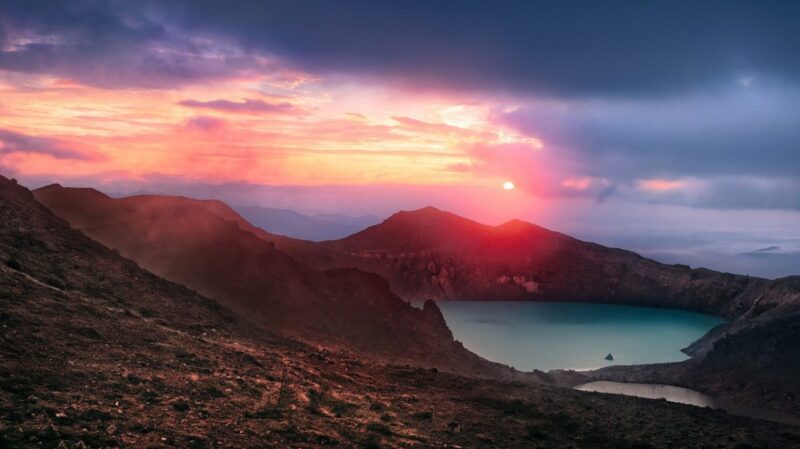 Gunma Prefecture is only a few hours from Tokyo, the capital city of Japan, and the prefecture is blessed with natural wilderness like rising mountains and hidden valleys. Located in the countryside, Gunma is perfect to visit for those who want to escape from the hustle and bustle of Tokyo.

Gunma is landlocked by other prefectures in Kanto and Chubu regions, including Saitama, Tochigi, Yamanashi, Nagano, and Niigata. The prefecture is best known for its high-quality hot springs like Kusatsu Onsen and Ikaho Onsen, where you can relax and recharge your energy after having a long trip.

Brimming with beautiful nature and interesting tourist destinations, how about visiting Gunma to have both, an extraordinary, yet a relaxing adventure?

Gunma is only a few hours drive from Tokyo, and the prefecture is accessible by both, trains, and highway buses. The main transportation hub in Gunma is Takasaki Station.

The fastest way to reach Gunma from Tokyo is by taking the JR Joetsu Shinkansen or JR Hokuriku Shinkansen from JR Tokyo Station, and the fare, which is around 4,000 yen one-way, is covered by the JR pass.

Gunma is less than 2 hours from Tokyo, and the prefecture is blessed by beautiful nature as it landlocked by other prefectures in the Kanto and Chubu regions. The prefecture is best known for its scenic mountain like Mt. Akagi and Mt. Haruna, and its amazing hot springs like the Kusatsu Onsen and Ikaho Onsen.

Here are our picks for the best things to do in Gunma, Japan!

1. Visit Kusatsu Onsen, the most famous hot springs in Gunma 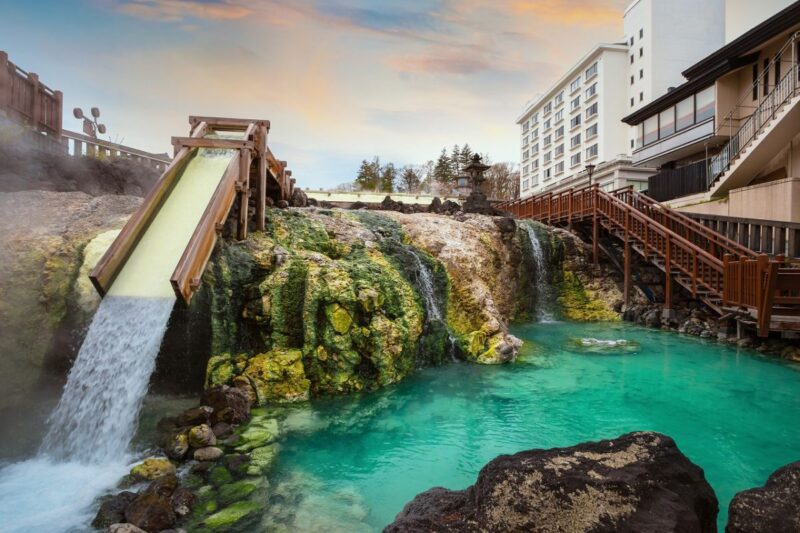 Kusatsu Onsen is known as one of the three most famous hot spring towns in Japan, along with Gero Onsen and Arima Onsen. The onsen is known for its immense quality and quantity of its healing spring water, and the acidity of the spring water is strong enough to kill bacteria on contact and can treat inflammation. The main area of Kusatsu Onsen is the Yubatake, which literally means ‘hot water field’, is a unique place where you can observe the sulfuric waters flowing down from the mountain. 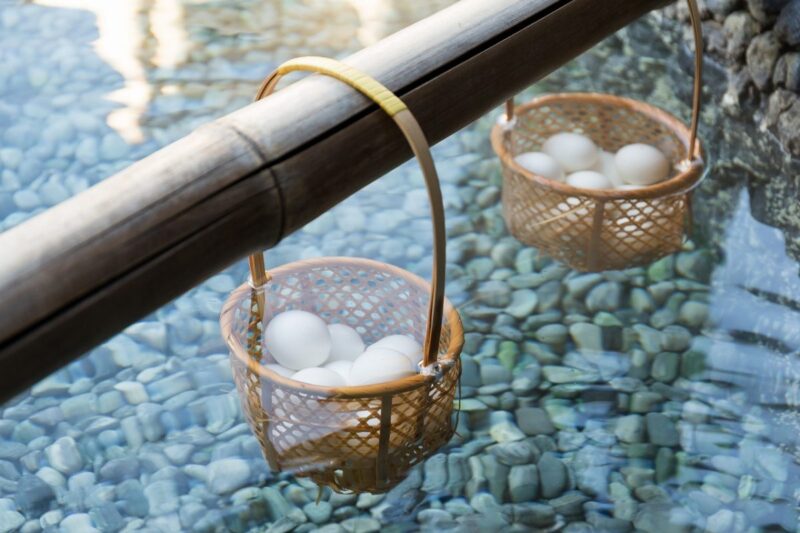 There are a lot of bathhouses in Kusatsu Onsen, and our favorite is the Netsu-no-yu, a local bat house located next to Yubatake, known for its yumomi performance, where local women sing while stirring the onsen with wide wooden planks to cool down the hot spring water. There are also public foot baths around the town, and you can also boil or steam your eggs in the onsen if you want to. 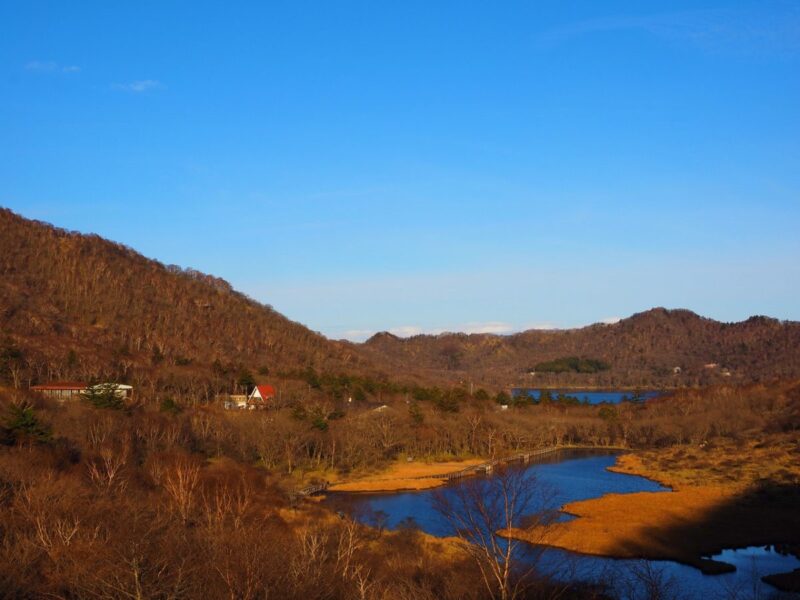 Kakumanbuchi marshland stretches across the mountains around Mt. Akagi, and it is known for its spectacular seasonal views, which all four are very distinct and colorful. Also called ‘Little Oze’, the marshland is covered with azaleas in spring, wildflowers, and grasses in summer, autumn leaves in fall, and snow in winter. 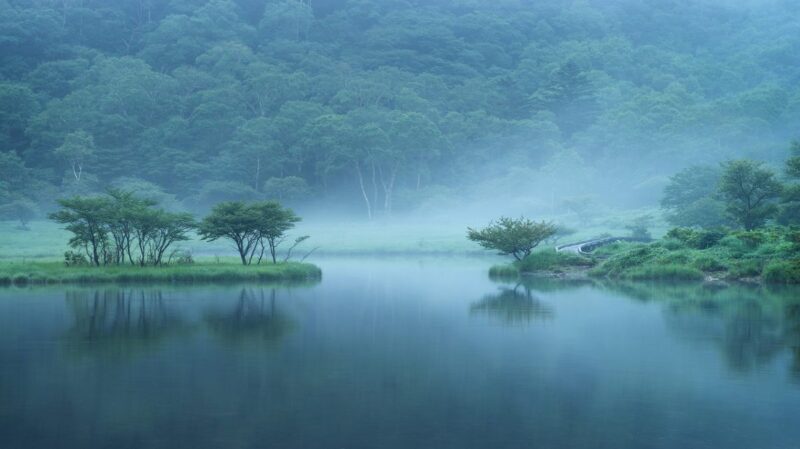 The best timing to visit Kakumanbuchi Marshland is in fall when the slightly cold weather brings misty mornings and turns the grass and trees to gold and red. 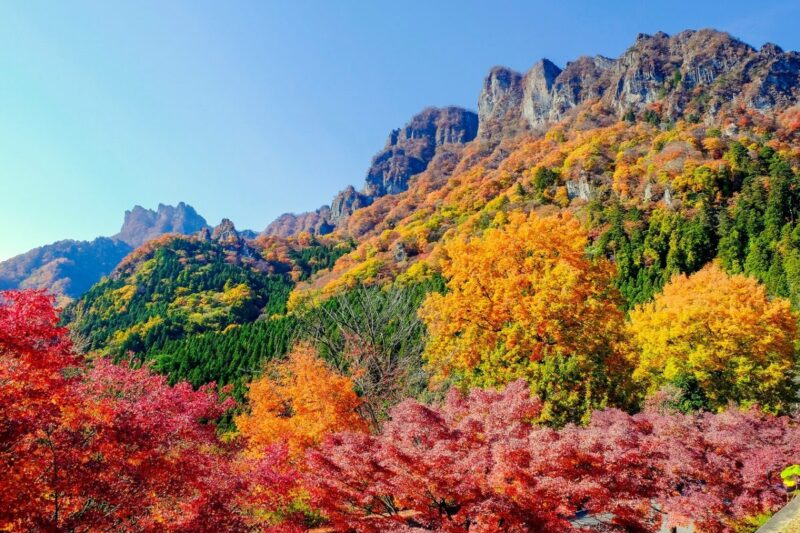 Mt. Myogi is a part of the major mountains in Gunma, and it is best known for its rocks that formed into spectacular formations and its beautiful autumn colors. The sharp peaks of Mt. Myogi pierce the sky, and the unusual rock formations provide a tempting challenge for rock climbers and hikers.

Myogi Shrine, which was built in the 1700s, is nestled among the rock formations, and there are also several hot springs around the shrine, where you can enjoy a soak before you leave the mountain.

The best time to visit the mountain is in the spring, or the fall, to see the vivid colors of the flowers and trees.

4. Witness the beauty of Lake Okushima 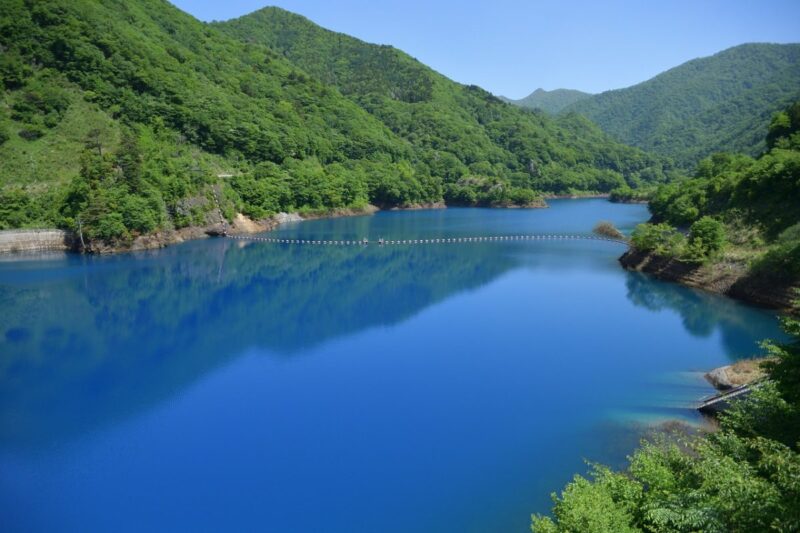 Lake Okushima is in the northwestern of Gunma, particularly in the Agatsuma region. The lake is best known for its vibrant cobalt blue water, and its forested highlands, which looks very beautiful in the summer. 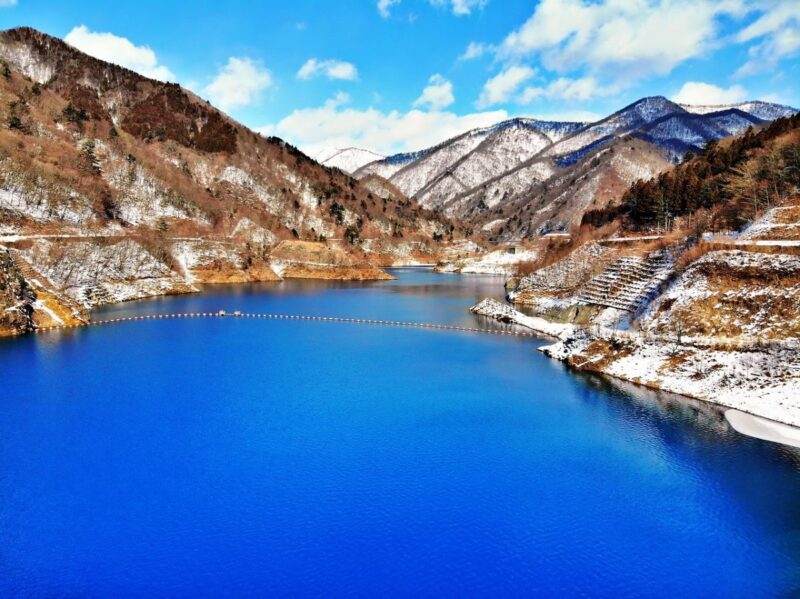 The lake is a reservoir of Shimagawa Dam, a dam placed in Shima River, and it is possible to walk across the area as there is a hiking trail that is opened in the summer, that takes you from the lake to its surrounding mountains. 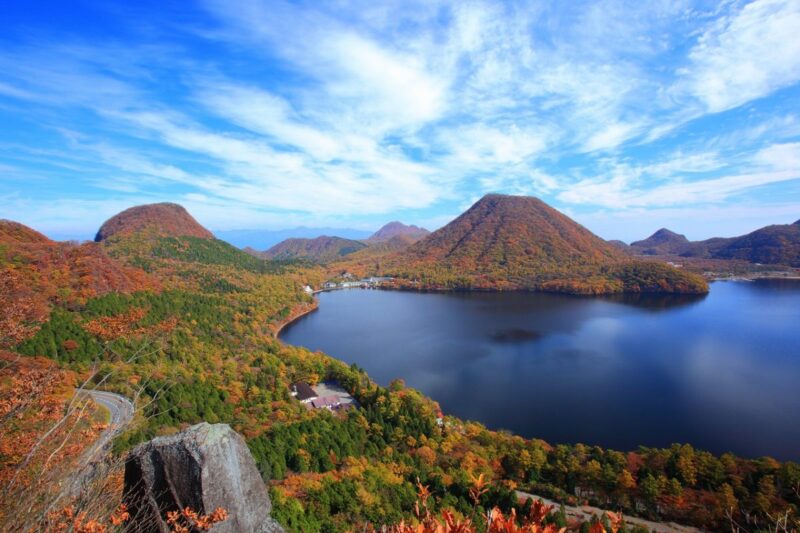 Mt. Haruna is a volcano in Takasaki, Gunma, and it is one of the Jomo-Sanzan, the three famous mountains in Gunma. The mountain is a 1449 meter high, and there is a crater lake called Lake Haruna, which is a popular spot for boating and fishing. 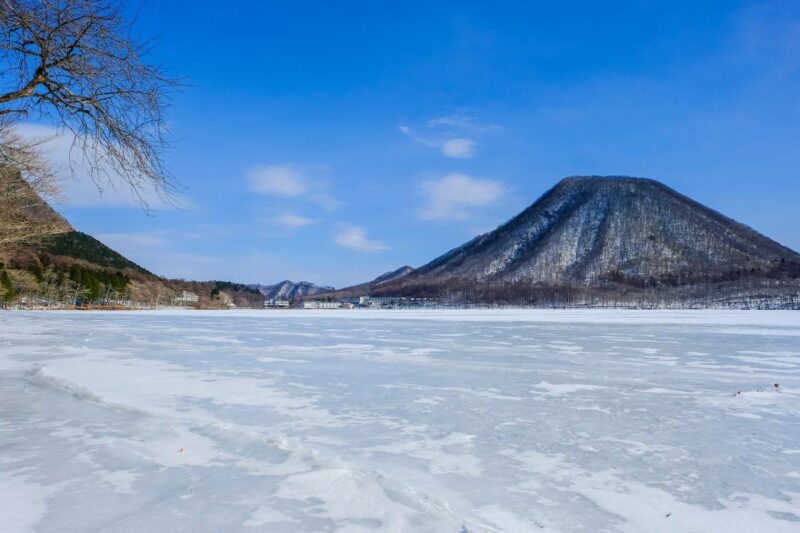 The surface of Lake Haruna freezes in the winter, making it a popular spot for ice-fishing. So how about visiting Lake Haruna this winter for a new fishing experience?

6. Stroll around Ikaho, one of the best hot spring towns in Gunma 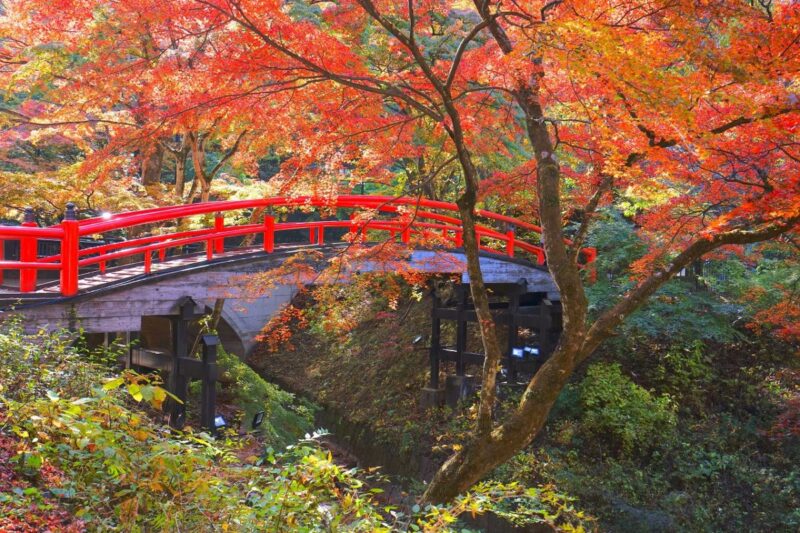 You should put Ikaho on your list if you love both, the hot springs, and the retro flair of Edo period!

Located in Shibukawa, a city in central Gunma, Ikaho is a hot spring town with more than 400 years of history.

Ikaho is best known for its bright red bridge called Kajika Bridge, which is not so far from Ikaho Shrine. 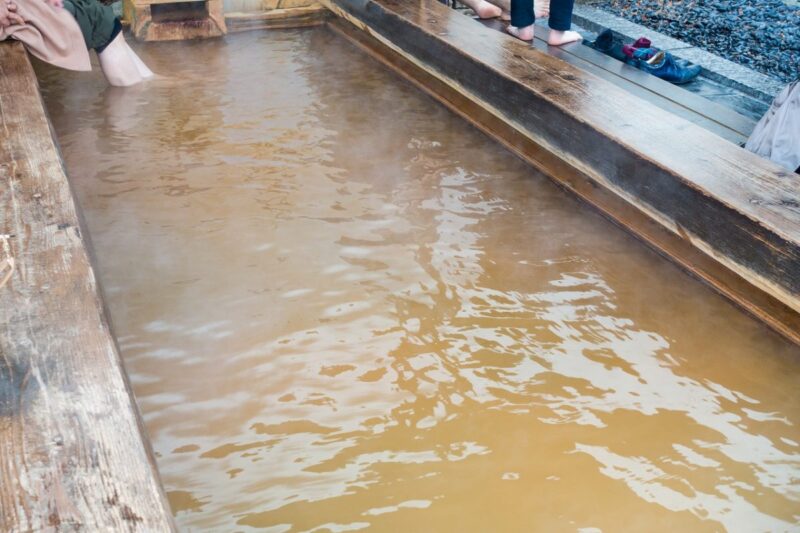 The best time to visit Ikaho is in fall, when its surroundings are covered by the vibrant autumn leaves. There are also several foot baths in Ikaho, where you can have a soak in between your trips.

7. Enjoy the beautiful nature of Minakami 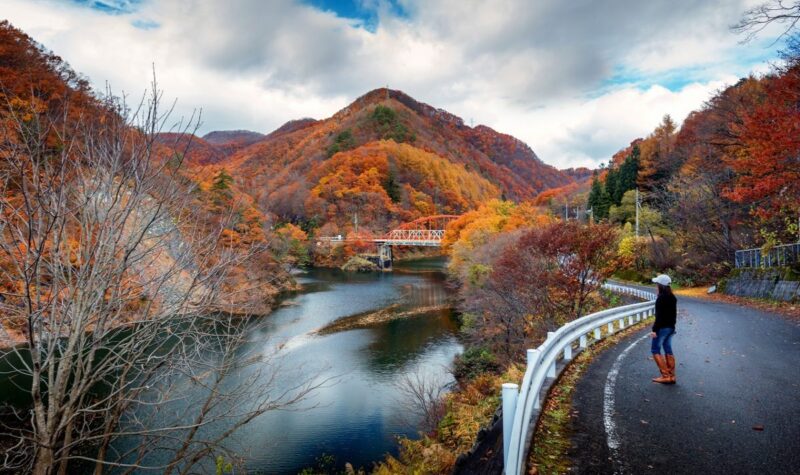 Minakami, which is located nearby the Mt. Tanigawa, is a beautiful hot spring town in northern Gunma Prefecture. Minakami is best known for its Takaragawa Onsen, one of the largest outdoor baths in Japan with a mixed (co-ed) hot spring.

Minakami also has numerous ski resorts, and it is best known as the one of the closest winter destinations to Tokyo.

In addition to ski resorts, Minakami is also known for its amazing river, which is good for water rafting, and also walking trails that are great for hiking.

8. Stop by the tremendous Mt. Akagi! 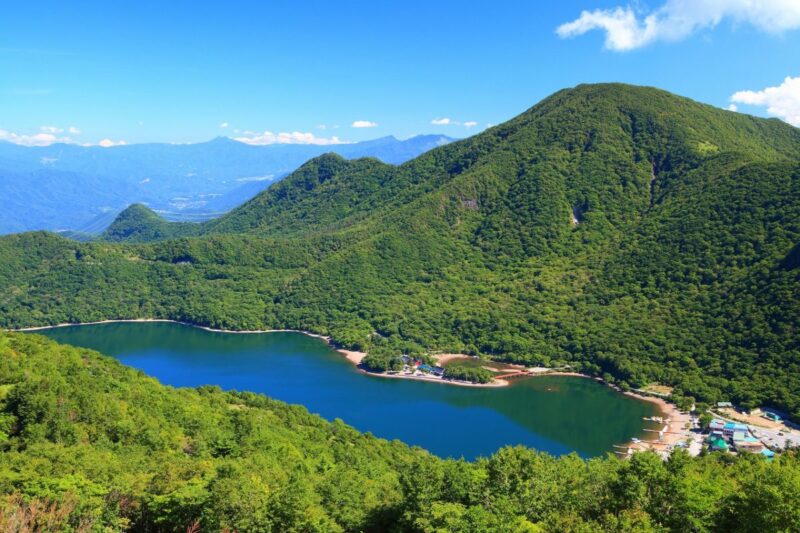 Another mountain in Gunma you might want to visit is Mt. Akagi, which is not too high, but broad in size. The mountain is in central Gunma, and is also one of the Jomo Sanzan, the tree most famous mountains in Gunma. 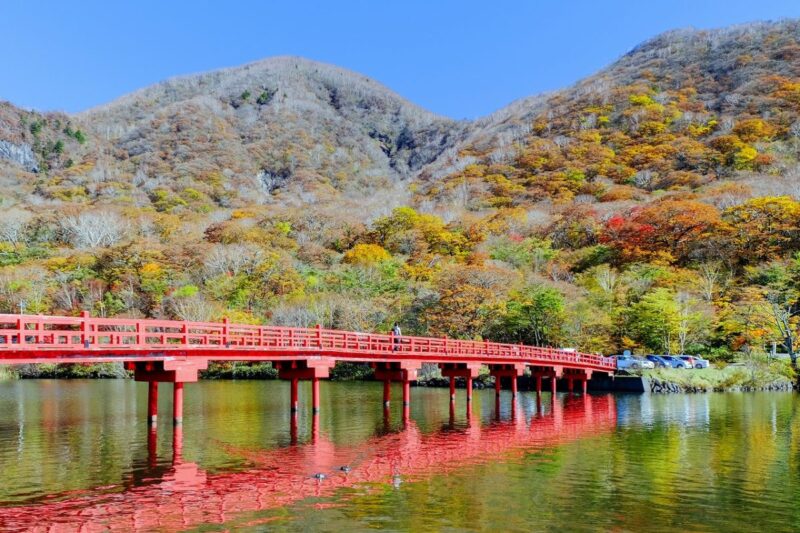 One of the most iconic spots in this mountain is the red sacred bridge of Akagi Shrine, a shrine where the deities of Mt. Akagi and Lake Onuma are enshrined. You can visit the shrine before climbing the mountain. 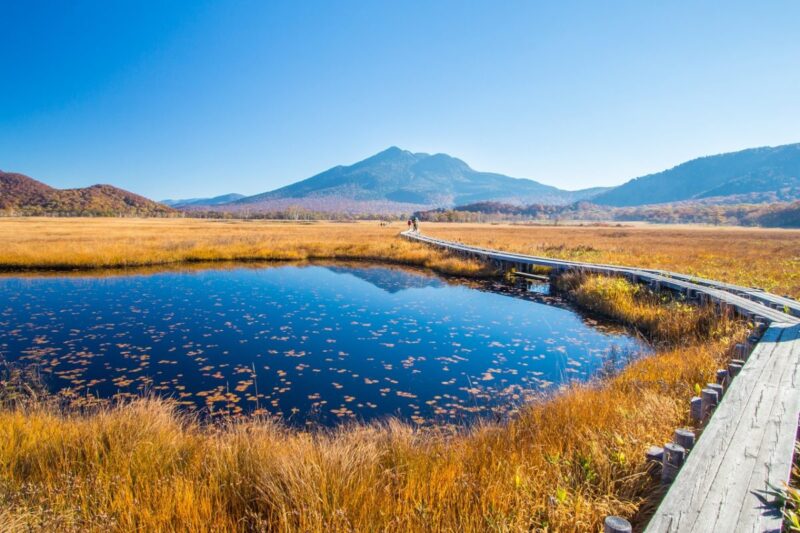 Oze National Park is known as the biggest highland marshland in Japan, and it was a part of the Nikko National Park but was separated later in 2007. The park is best known for its beautiful landscape, with several beautiful fields and amazing hiking trails.

The best time to visit Oze National Park is in late spring when the fields are covered with skunk cabbages, and in fall when its surroundings are covered by the autumn leaves. 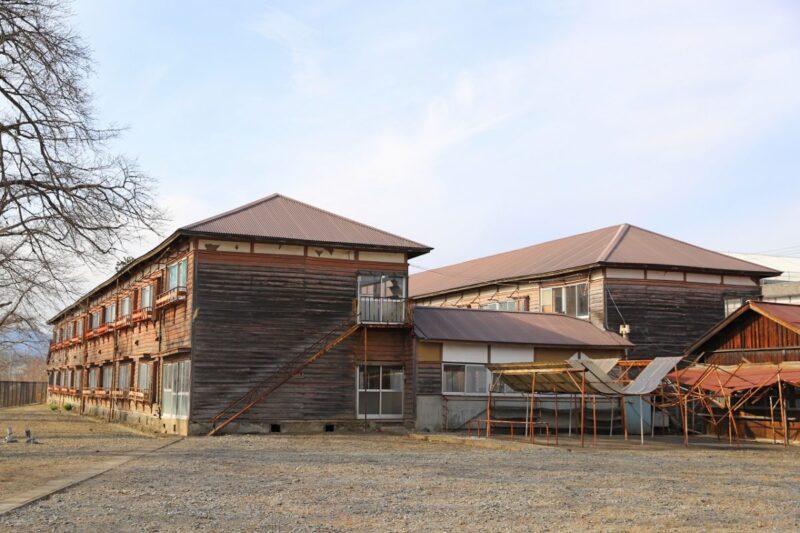 Tomioka is in the southwestern of Gunma Prefecture, and it is known as the site of Japan’s first modern silk factory, called Tomioka Silk Mill. Tomioka Silk Mill was established in 1872, and it served as a model for other silk mills in Japan. The mill was one of the most important silk mills in Japan, as it supported the country’s textile industry for several decades, helping Japan sustaining the growth of its economy. 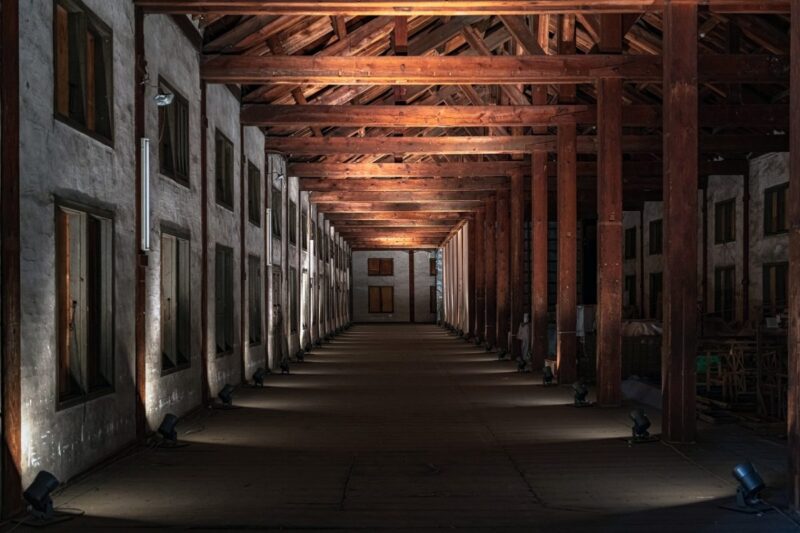 The mill is also known as one of the world’s largest silk mills at the time, and the silk produced in Tomioka was known for its high quality. The original buildings of the mill are well preserved and registered as a World Heritage Site in 2014. You can participate in a tour that allows you to explore the mill. 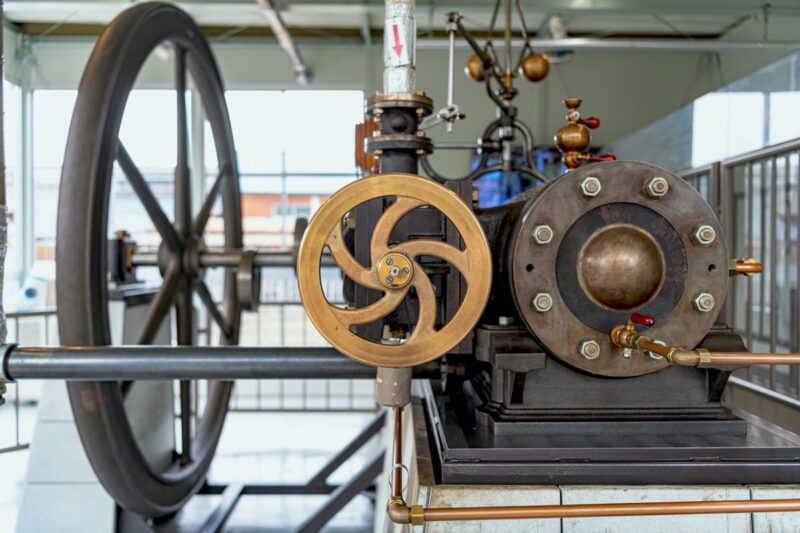 Inside the mill, you will find an old steam engine that used to run the mill, which is still well preserved, even until today.

Gunma is landlocked by the prefectures of Kanto and Chubu regions, and it is home to a variety of local foods, like Okkirikomi, Grilled Manju, Konjac, and Himokawa Udon. Here are our picks for the best foods to try when visiting Gunma! 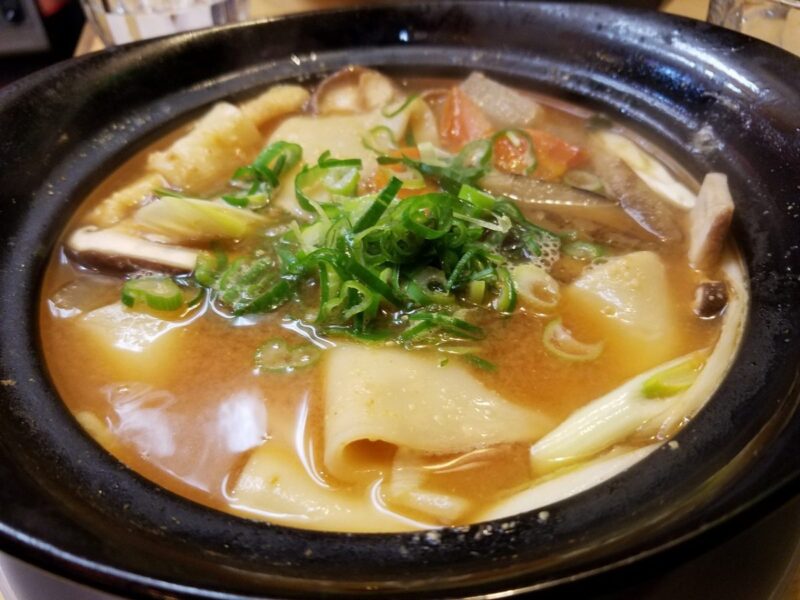 Gunma is known as one of the largest wheat producers in Japan, and the prefecture has developed many wheat-based products, like Okkirikomi. Okkirikomi is a dish consisting thick and flat white noodles stewed in a soy sauce and miso-based broth together with vegetables like carrots, leeks, potato, and shiitake mushrooms. 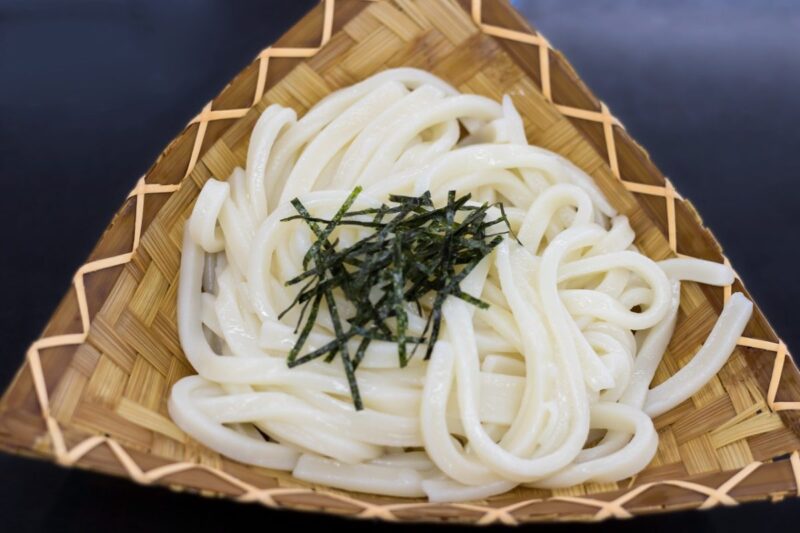 Gunma is home to a wide variety of wheat-based products, including the thin tatebayashi udon, wide and flat himokawa udon, and Gunma’s most iconic udon variety, Mizusawa udon. Considered as one of Japan’s highest-quality noodles, Mizusawa udon is best known for its smooth texture, but firm bite. 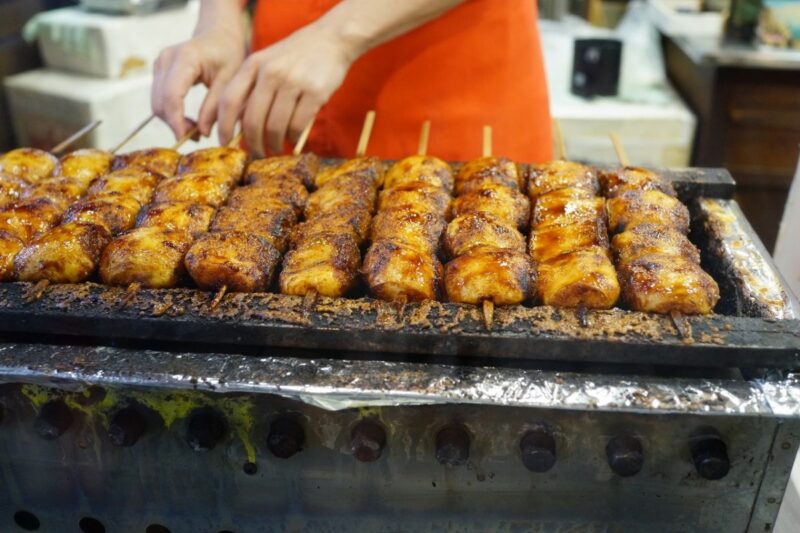 Yaki manju has been sold in Gunma since Edo period, particularly by a shop in Maebashi, where they grilled manju and coated them with miso sauce, creating a sweet and savory manju that has a crispy shell and chewy center. Perfect for a snack, why don’t you try yaki manju when you’re in Gunma? 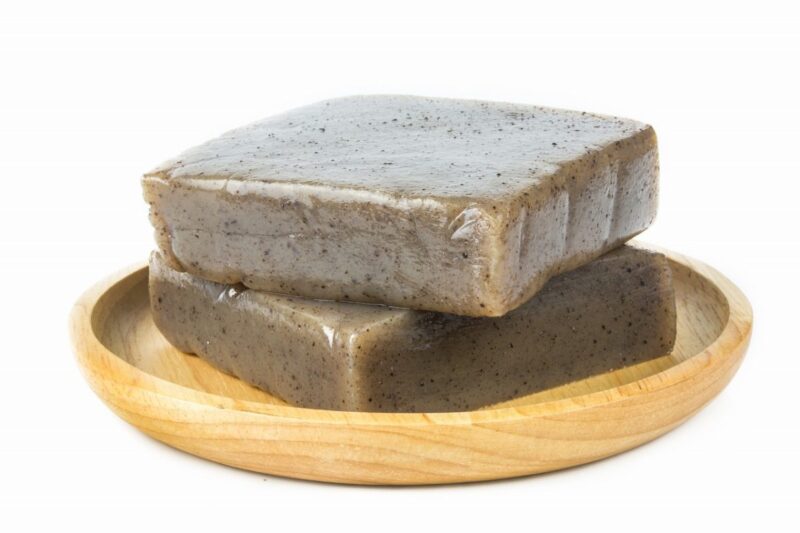 Konjac is a Japanese superfood that is gluten-free and has zero calories. Konjac absorbs the flavor of broth and sauces, and it is often used as a meat substitute for vegans in Japan. More than 90% of konjac in Japan is produced in Gunma, making it the largest producer of konjac in Japan. 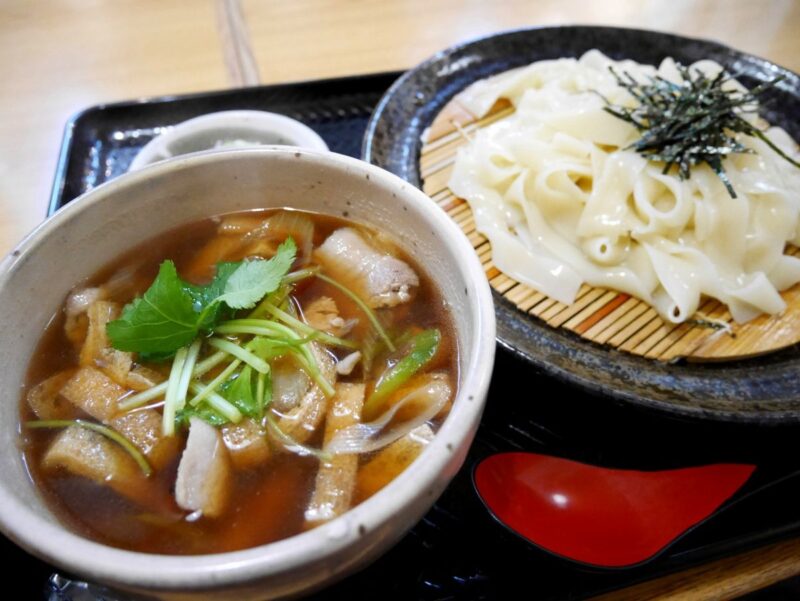 Gunma is known as one of the largest wheat producers in Japan, and the prefecture is home to Himokawa Udon; the flat and wide udon noodles. Himokawa Udon is slightly thinner than normal udon, and it is best known for its smooth texture. Some restaurants offer noodles up to 10 cm wide.

Now that you have an idea of how many fabulous spots are in Gunma, all you must do is plan your itinerary to enjoy unforgettable experiences in Gunma!

Clip Read
Top five free things you can do in Tokyo

Clip Read
Things to do and see around Kawagoe city, Saitama

Clip Read
10 amazing things to do in Tochigi, Japan!