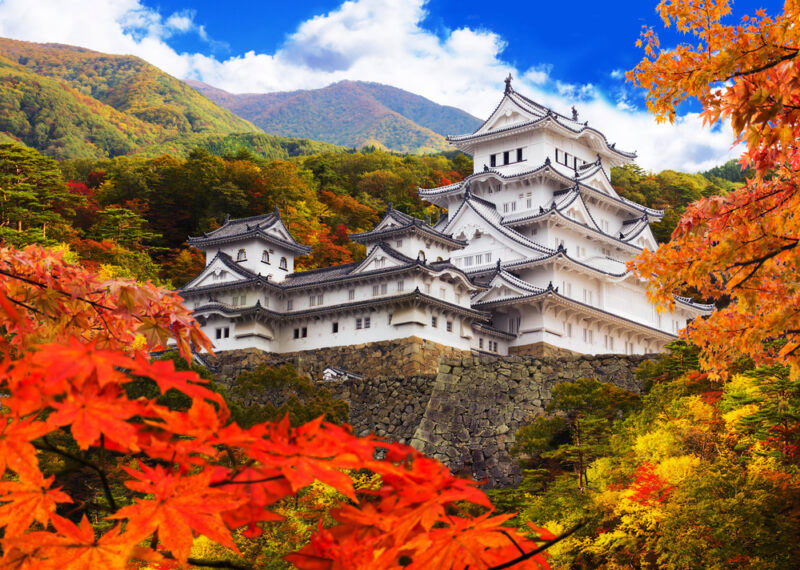 In addition to its beautiful cherry blossoms in spring, fall foliage is another reason for tourists to visit Japan, particularly for enjoying Kōyō (紅葉) and Momiji (紅葉) every year.

Although both are written in the same Chinese characters, Kōyō refers to foliage with red and yellow colors, while Momiji specifically refers to the spectacular view of red maple leaves in fall.

“Hyogo” is the prefecture known as the location of the famous city like “Kobe”. But if we travel to Hyogo in the Fall, what place can we fully enjoy seeing the beauty of this season? Let’s find the answer in this article.

The fall foliage in Hyogo usually is at its peak from late November, and this feature will introduce some of “the best spots in Hyogo where you can enjoy fall foliage”. 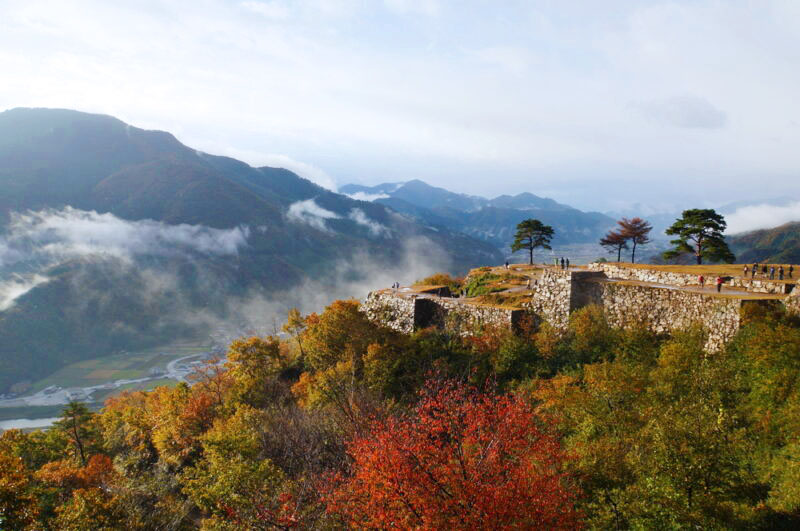 Takeda Castle Ruins is a castle ruins in Asago City, and it is one of the most popular mountain castles (yamashiro) in Japan. Built on top of a mountain of an elevation of 353 meters, the castle looks like it is floating on the clouds in some seasons. Due to its unique appearance, the castle is often called ‘Castle in the Sky’.

In fall, especially on sunny early mornings, the morning fog will usually appear, wrapping Takeda Castle Ruins in a sea of clouds, allowing you to enjoy the mesmerizing views of both, sea of clouds, and red autumn leaves. 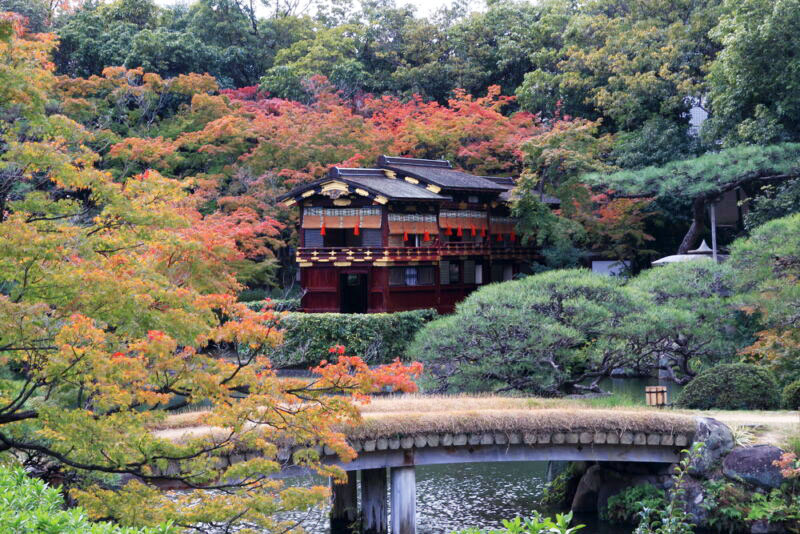 Sorakuen Garden is a beautiful Japanese garden in Kobe, which was originally a part of a private residence, until its ownership was passed down to Kobe City in 1941.

Ever since then, the gardens have been open to the public, exhibiting beautiful seasonal flowers and trees. Unlike other gardens, the trees at Sorakuen Garden are arranged in a way to maximize the beauty of fall colors.

Only at this garden, you can enjoy the stunning fall colors created by the camphor laurel, maple, and dogwood trees. 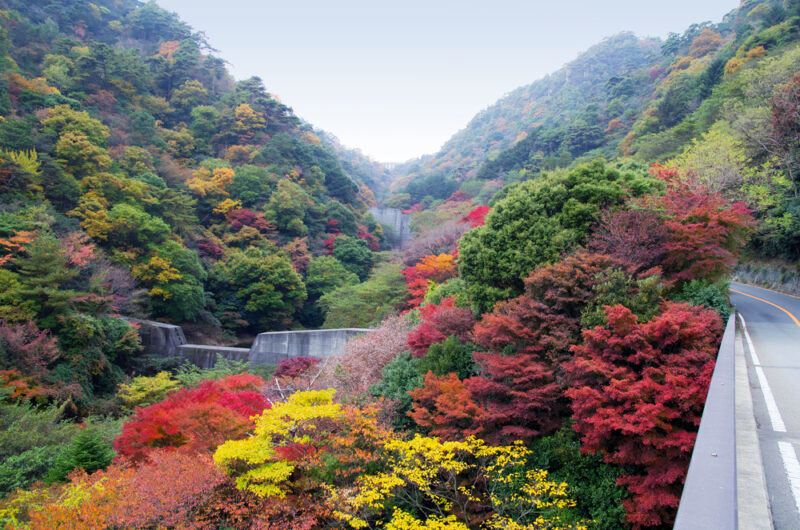 Mount Rokko is perhaps one of the most popular sightseeing spots of Hyogo Prefecture. It is the highest peak in the Rokko mountain range, providing the aesthetically stunning green backdrop to the city of Kobe. From Mt. Rokko, you can also enjoy the panoramic views of Kobe and Osaka, the heavily urbanized cities in the Kansai region.

One of the best ways to enjoy your time at Mt. Rokko is by visiting it in fall, when the trees change their colors to yellow, orange, and red. 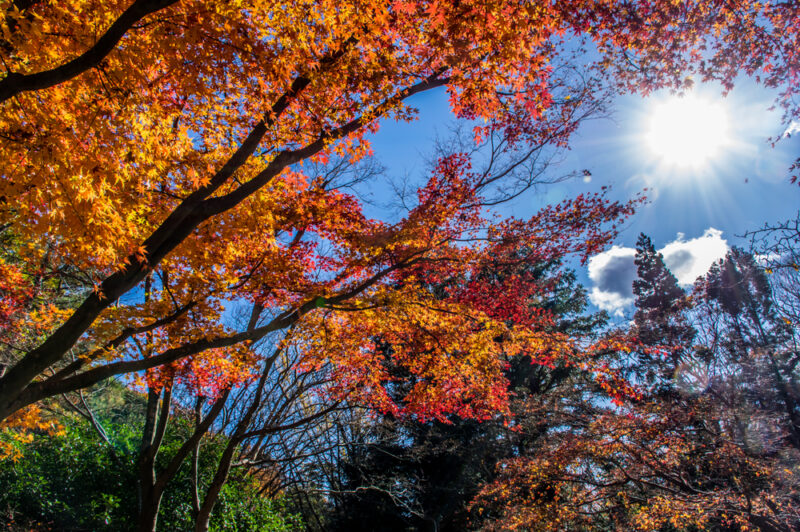 This garden is such an oasis of nature; you can enjoy the sights and sounds of the forest without going so far from the city center! It also has several hiking trails, which all take around an hour to walk.

In fall, you can immerse yourself in a forest of maple leaves here, surrounded by the fiery colors of fall. 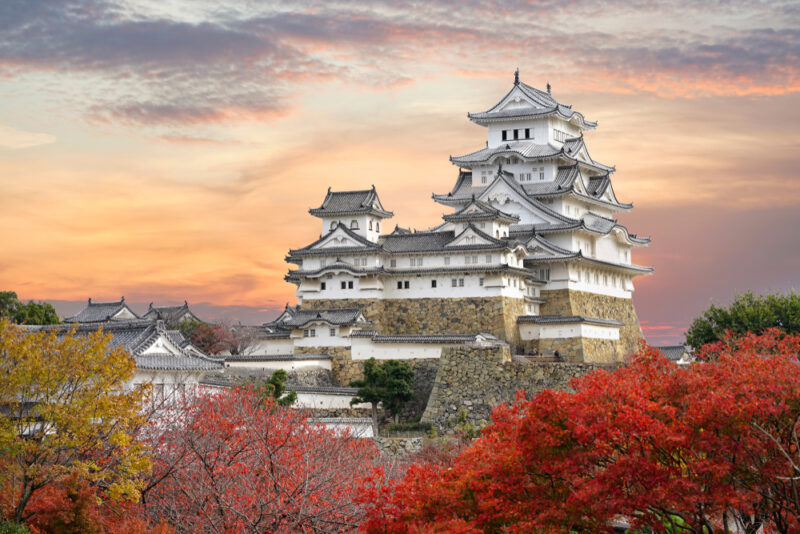 Himeji Castle is known as one of the greatest castles in Japan, and it is the only fortress that has survived the war in its 400-year history. The castle is a designated national treasure and World Heritage Site.

It is expansive and it features a vast area of 233 hectares (576 acres), and it is home to many cherry trees and maple trees. The most popular viewing spot is the area in front of the castle tower, where  you can enjoy the view of fall foliage with the castle in the background.